Kyle Peltier [GVSU-19] and crew is developing an Android app as part of a class project. He’s asked for some feedback, I figure we can use the comment form for this. -zm

Leaders of the NCDA,
Hello everyone.  Attached are (very rough) screenshot mockups of the proposed design layout for the NCDA Officiating App.  The screenshots are in no way the final product but they are able to convey the design ideas pretty well.  Please provide feedback on aspects of the layout; what do you like about it? What do you dislike about it? Do you think a different layout or flow would be better than the one proposed for particular tasks?  Is the view missing something you think should be there? etc. etc.

Allow you to set up the current game with basic settings.  Teams could be pre-programmed into the drop-down lists but I think there’s room here to download team rosters, logos, and other information from the NCDA website to add detail to the app.

This would be the main view for the head referee. The HR will control the game clock, the number of players on the court for both teams, and have access to the rulebook and penalty cards.  The +/- symbols next to the teams for scoring points will probably not exist in the actual application; instead, I’ll make the implementation so when a player count hits 0, the opposing team will get a point automatically.
We did some usability testing already and we found that the tab buttons at the top did not have a good trade-off between ease of navigation and information.  This method of navigation (which you’ll see in several screenshots) is likely to change.

These would be accessible by the HR only.  I’m thinking of having an additional feature here where the ref could input the player’s # and team.  You’ll notice the game clock still appears on the screen; I wanted the ref to be able to pause the game if something came up while issuing a card.  The view will probably also include the “whistle” button. These additional views will be held to some sort of transparency so it’s visible and accessible, but subtle. 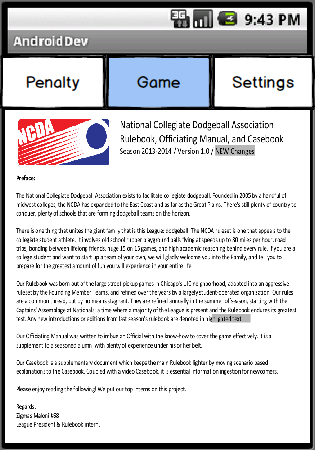 Just a PDF at the moment. I’ve implemented this code already and it’s working pretty well. It downloads the entire PDF from the website and displays it.  I’ll have to look into additional functionality like links to sections.  This may need to be implemented in the PDF file itself rather than the application. 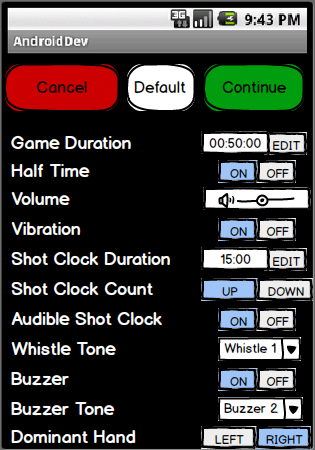 Showing a ton of settings to change.  I personally love customization so I’m planning on have lots and lots of settings.  Listed in the view are just enough to give you an idea of where I’m going with things.

This would be the Shot-Clock Referee’s view.  He/she would not be able to change the number of players on the court, only the head ref would be able to do that.  This hints at the idea that the apps are synced together.  The shot-clock ref would only reset the clock

I wanted to have some sort of dialog appear to ask the shot-clock ref to confirm or deny the shot clock violation.  Perhaps the referee was off by a millisecond from hitting the reset button when the team makes a valid throw, the shot-clock ref can deny the violation and the clock resets. 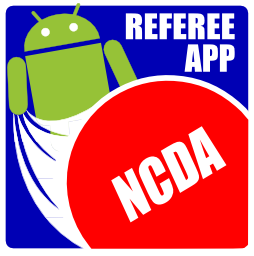