The Platteville Dodgeball Club is writing this article to bring up topics that we feel should be talked about in the league.  We discuss various topics that we have seen over the years that we feel are keeping the league from being really competitive.  In this writing if you feel we we’re calling out your team we are sorry and didn’t mean to.  After you read this we would love to hear on the captains’ page if you agree or disagree as well as any other things you feel that we may have missed.  Hopefully, this brings about some great discussion and will bring some changes for next year.

As a team from Wisconsin, we are bit of a haul from all the action that happens in Michigan, Ohio, and the East Coast. Yet we still try our best to make it to a couple of the tournaments that occur around the league. Don’t get me wrong if we had the funding we would for sure be coming to more. But this doesn’t always happen for us, if it wasn’t for Erik Zander, our president this year, I don’t know where our team would be.  I’m not sure if we would even have enough people to have a full team. He has really stepped up this year and is bringing back the club. Recent years, Platteville would maybe make it to one or two out of state tournaments the whole year. This year we have already been out of state twice and hosted two of our own tournaments/ matches. As our first tournament at home it was a blast to have, getting DePaul and Nebraska to come up and play gives us a push to possibly have more tournaments in the future. It would’ve been nice to see a bit bigger turnout, with multiple other teams wanting to participate. It may be a hike for some teams, but if Platteville is willing to make the trip so should other teams. Don’t get us wrong we know Platteville doesn’t have the overall talent that some teams do. But we feel as if our style of play is quite different than some of the fellow NCDA teams. So why wouldn’t a team want to play someone new? Some teams may think it’s a waste of time and money to come all that way just to play a few games then have to go back home. The fact of the matter is people should enjoy and embrace the journey to go and play other teams to meet new people and understand the different styles of play that are out there in the NCDA. Nebraska has an even farther drive than us to play in tournaments in the Michigan or Ohio area; we know that they would like to see other teams rather than just the same ones all the time. They want to get involved more in the NCDA but they don’t have the chance to make that long journey if other teams don’t make the effort to meet them half way. We understand that teams already have their mind set about only going a certain distance for games because why bother if you already play a ton of games, right? So Platteville will keep on pushing to do better and try and travel as much as possible to get some games in because it is fun and worth playing a variety of teams. 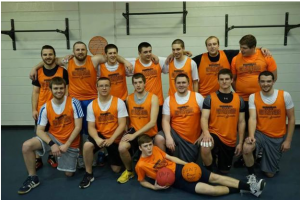 Platteville always tries to go to multiple tournaments. But it’s hard when so many of the tournaments are on Sunday. There is no way that Platteville would be able to make a tournament on a Sunday unless we rented a plane, let me tell you this, we do not have the funding for this. Platteville would have tried to come to more tournaments last semester, but the majority of them were on Sunday. We know it is cheaper to hold them on Sunday and that is why teams host on those days, but it makes it hard for us to ever go to any events since they are on Sunday.  Platteville would be even willing to pay a small fee for a tournament, like what we did at the CMU tournament. That is if we could play on a Saturday.  As a team, it is very hard for us to improve if we can never get to tournaments. It would also help if the major events were better scheduled in advance so other teams can have the opportunity to see if they can attend.  Also, this would allow for other schools to better be able to plan tournaments so they don’t conflict with one in other.  Another thing that we see as a problem especially when we try to host tournaments, is that other schools schedule a tournament the next day or a major event the next week, so everyone else goes to those tournaments because they are closer or they don’t want to tire out their team for the next week.  In the last two years that we have tried to host a tournament we have been able to only get Nebraska and DePaul to come and it sucks for us because we tell everyone in the league at least four months in advance and no one ever commits to coming to Platteville.  We know that part of the reason why the Michigan teams are so good is that they are so close to everyone that they can play games constantly, even on Sundays, so they are always improving.  Just think if more tournaments were on Saturday and more teams would travel to places that are farther away such as Platteville or Western Kentucky, how good the league could be with talent. Personally, we feel a lot of teams hit a wall each year when it comes to improving because they can’t get any matches in against other teams. This happens because no one is willing to travel the extra distance or schedule tournaments on a Saturday.

We quite enjoy the ability to have the captain’s club page to have other captains and players to be able to communicate about tournaments and other items that are going on around the league. If it wasn’t for this Facebook page and the NCDA website it would be hard to know what is going on around the league. The one thing that we noticed is some of the lack of communication. These websites are there for us to use but it seems as if they don’t use them to their full potential.  If a team posts about a possible tournament that they are going to have, and they ask “who wants to go?”, we feel that starting in the future every team is obligated to respond and either say they’re able to go or not go or maybe. If a team doesn’t respond the hosting team isn’t sure if the team got the message or if they’re just ignoring them. So as respect to a team we feel that all teams should give a shout out to the hosting team whether or not they’re are able to attend the tournament or not. Or if the hosting team is only looking for a certain amount of teams or just specific teams, they should inform this when they post it. We know some teams do this already; all teams should continue or start this type of communication. It will help out tremendously with any mix ups, the people that take care of these pages do it to help keep everything organized, so we might as well use them to their full potential.

When we tell people that we are part of the dodgeball club they always ask, “Is it like the movie dodgeball?”. We answer, “kind of”, when you see the movie it’s faster pace and a lot of things are going on at once. But when looking around the NCDA it isn’t quite that style of play besides a few teams. When looking over some of the tournaments that have gone on this year we have really noticed a slow style of play. It’s hard to watch when a whole game is about one team throwing maybe one ball, getting back, waiting for the other team to throw, charging, and throwing one maybe two balls at most. This style of play really drags on in our eyes. We understand that it’s a good strategy for teams to use because it gives them ball control but it’s just not fun to watch. But once it’s the last couple of minutes of the game and it’s close and a team is down, the higher level of excitement begins to show. People are constantly throwing and are all over the place but still with a strategy. It creates a chance for incredible plays and really makes it entertaining to watch. Players may think that the fast play may not be the best way to go about the game, because you have a better chance of getting out and being less organized. In this past tournament in Platteville, with Nebraska and DePaul visiting, the level of intensity was always there. All teams were charging up and throwing no matter who had the upper hand. This style of play makes it more exciting to watch and be part of. It’s not any fun when a team throws one ball then waits until the other team counters. It really drags on when you just sit there waiting for a team to throw. But when a team holds the line and you have to try and push them back, that’s something to watch, games change quite quickly when some small mistakes are made. We’re not saying that teams need to change their style of play at all; they can do whatever is working for them. It’s just hard to watch a game when it’s just slow pace and not much action is going on.

After going to multiple tournaments over our whole dodgeball careers we have noticed a lot of complaining about dodgeball officials. All you hear is that they missed this call and that call. But the fact of the matter is, it’s not the referee’s fault for all of this. Yes, the ref is supposed to watch and make sure that no one is going out of bounds, crossing the neutral zone, or if catches and traps look to be truthful. It seems that most of the controversy is coming from calls made about players being hit and the ref is not seeing them, causing a whole feud between teams. The true problem is the amount of cheating that is going on. We personally have seen multiple players that have obviously been hit, proceed to see if the ref had seen the play and continue to play no matter that he/she is out. This is just absurd, if you get hit in any circumstance of play and it is obvious, you should exit the game. If you don’t exit the game it really shows the “level of passion” you have for the rules. It shows that you don’t care about the rules so why should other teams care? It all starts with one team trying to get away with a few things that makes a feud between teams. Nobody likes to go out there and have to argue about play calls, we are out there to have fun and win. If you have to cheat to win, then you’re not doing it right.