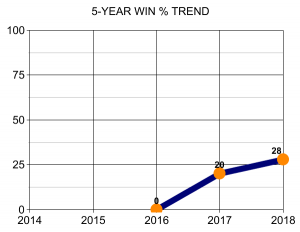 Season Preview: UVA left off last year on a high note as they carried momentum into Nationals and finished the tournament with a 3-2 record. They’ve improved each year they’ve been in the league and will again shoot for another year better than the last. Helping with that will be their freshman class, who already looks to be a solid group. Although a top-two spot on the East Coast may be out of reach, UVA will be fighting to establish themselves as a solid number three.

The Good News: Due to being a new program, UVA didn’t lose anybody to graduation this past year. They retain their entire Nationals 2018 roster and even some guys that weren’t able to make the trip. They will operate under similar leadership to last year with Zane Durbin taking the role of Captain and Ryan Kelly stepping up as the third AC. UVA will also benefit greatly with their second-year players gaining more and more experience.

The Bad News: The main issue for UVA this year (and in years past) will be consistently putting the same guys on the court at the same time. All of the players at UVA are involved in other organizations and sometimes those organizations conflict with dodgeball tournaments. In the past, UVA was constantly forced to go to tournaments with very few subs and even one tournament with 11 players. Don’t count on that happening again, as UVA will lean on their new crop of freshman talent throughout this semester to bolster their roster.

Our Call: They’ve shown that they’re talented, they have experience, and now it’s time for them to capitalize on all of that. UVA looks good on paper and is expected to prove it this year. Improvement from last year seems to be inevitable for this squad, the question is just how much. This will be a team to watch out for at Nationals 2019, as they’ll look to send their first graduating class (of 7!) out with a bang.