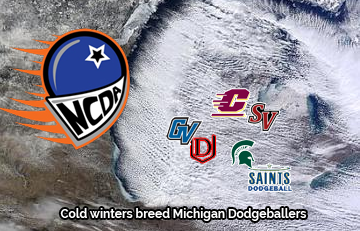 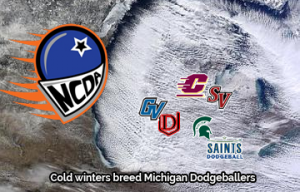 With spring semester fast approaching, or having already started for some schools, what better time to start looking ahead to the second half of the 2013-14 season. Starting with what would be considered the SEC of college dodgeball, here’s how I think this semester will break down.

1. Grand Valley: What is else is there we can say about these guys? Seriously, if anyone can find a new accolade or compliment about this team please let me know. The Lakers might as well be the NCDA’s Alabama from the last couple of years. Unlike this year though, I don’t see these guys faltering, or having one of the parent(s) of a player tweeting about another player in the league’s ability to speak English (thank you Dee Dee McCarron). While I could go on and on about how dominant Grand Valley has been seeing as they haven’t lost a match yet, they have shown some kinks in their armor. Saginaw Valley, James Madison, Kent and Ohio State have all taken points from them. Do I see any of these clubs knocking off GV before they win yet another championship? Survey says: no. Official prediction: #1 Michigan Seed, #1 national power ranking

2. Saginaw Valley: I think I already said this once, but even if I did I’ll say it again: I seriously underrated the Cardinals at the beginning of the season. I don’t know why but I thought they were on the verge of falling off some after their loss to Michigan State at Nationals last year. However, I will not equate them to this year’s Auburn though and call them a team of destiny. With Max Siler running the show, and Zach Phelps helping as an emotional leader, the Cardinals could very easily make it to the final match this year. Saginaw has only lost to Grand Valley, Kent and JMU this year, and wiped the floor with everyone else from what I’ve heard. Oh, and as a last point, Spencer’s back for another semester…. again. Official prediction: #2 Michigan seed, #2 National power seed.

3. Central Michigan: even though the Chippewas are currently #9 in the nation I don’t think anyone is foolish enough to think these guys deserve to be ranked that low. Based on what I saw back at the Summit Street Slugfest, Central was already a solid catching team, and could possibly develop into the best by the end of the season. With what I’d consider the best catching duo in the league, Wes Peters and Brett Hadwin, the Chips have a great chance of staying in any match based on pure hands alone. I think how far they go this semester will be dependent on how they develop their throwing capabilities though. Even though guys like Peters and Hadwin also have good arms, they need to get their younger guys to step up if they want to get back to the championship game this year. Official prediction: #3 Michigan Seed # 5 power seed.

4. Michigan State: The Spartans started the year off in a rough patch, clearly showing how youth-laden their squad is. Even though they started behind the proverbial 8-ball, Michigan State won three of their next four match-ups, with their only loss coming at the hands of in-state rival Saginaw Valley. Even though I haven’t gotten a chance to see MSU since they played at Kent, it is clear to me that captain Mike Van Ermen and his guys have been putting in a lot of work to improve themselves from the beginning of the semester to now. I’d put Sparty as the #3 seed for the Michigan region, but I think the fact that CMU had one more win than them in the fall will be crucial in terms of seeding. Official prediction: #4 seed, #7 national power seed. 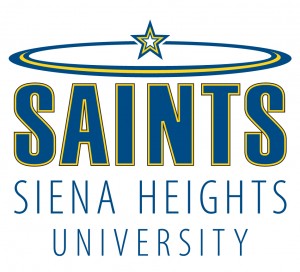 5. Siena Heights: I can’t really say too much about Siena since I have yet to see them in person. I could reiterate things like how they are lead by NCDA-vet Mike McCarthy, but I think everyone who pays even an ounce of attention to the league knows enough about him and his immortal pool-picture. On a serious note for how I think their semester will go, I think Siena will grow into an unpredictable team come April. What I mean is that they could easily knock a higher ranked team out of the tournament, but just as easily lose in the first round as Nationals newbies. Official prediction: #5 Michigan Seed, #14 national power seed.

#6 Davenport: Another team I don’t know much about. Actually, I know less about the Panthers than I do Siena thanks to McCarthy. Going winless in their opening semester, I think Davenport will win at least one match this semester depending on how their schedule shakes up. Based on seeding, I could see DU making a first round exit, being forced to play an upper-tier opponent. Official prediction: #6 Michigan Seed, #19 national power seed.

Up Next: Ohio Region