National Tournament Finish: Lost to SVSU in the Quarterfinals

Overview: Expectations for this team to win a National Championship this season are at an all-time high. They have the talent, the leadership and the drive to do just that, but their biggest difficulty has been their inability to win close match-ups, especially when their captain is not on the court. One can only imagine that this squad is looking to move past last season, where they lost a close game to SVSU in the Quarterfinals and failed to make the Semifinals for what would have been their third year in a row.

Their are plenty of reasons for this team to be optimistic about their upcoming season and the primary reason is they are hardly losing any of their primary play-makers from a season ago. To start, this team returns their best player and captain in Colin O’Brien. Colin knows this game as much if not more then any other player in the league, he knows how to strategize differently for every opponent and has a gift for leading. He is easily one of the most consistent catchers in the league and is quite difficult to eliminate.

Another important player on this team is Alex Zajac who drastically improved from his first season. Similar to Colin, he has a solid understanding of the game and rarely makes mistakes, which is why he is almost always one of the last players in on his team. Taking over the second assistant captain position is Kameron Caldwell. This classy individual is either hot or cold on the court. There have been times where he will catch 5 or 6 balls in a single point and drop two in a row in the same point. If he wants to help take this team to the next level he will need to become a more consistent player.

The biggest question mark this team had last year and will have once again is whether or not Noe Galaviz is committed to the team. This young man is one of the most talented players in the league, but his lack of attendance at practice and most of MSU’s matches has hurt his ability to develop at the speed many thought he would. Without him, this team’s athletic ability decreases immensely. If MSU hopes to win a National Championship, they better hope Noe is along for the ride or else I don’t see them doing it without him. He is just that good!

As I am sure most of the league already knows, Wes Peters, former captain of Central Michigan has graduated and is getting his Masters program from MSU. Wes will be playing for MSU this season which is a big plus for them, because they get a very experienced veteran who has played in two national championships, plenty of leadership experience and a consistent catcher.

One of the great things about this league is the amount of friendships and acquaintances you make due to the amount of times you face off against a team, which is why I truly believe that MSU has what it takes to win a National Championship. However, my biggest concern for this team is whether they can come together as a team and get over their biggest weakness, which is not collapsing when Colin gets eliminated. If they can do that then there is no doubt in my mind that they will take one or more victories from both GVSU and CMU this year, but only time will tell. 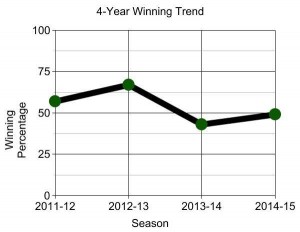