I was recently asked on twitter by Spencer Jardine (formerly of SVSU):

“@NCDASam So we just had two full seasons of the new opening rush. Any thoughts on one of the biggest changes in the past few years? Success?” -@Jardine77

I feel like two seasons is a proper amount of time to analyze something. You’re not overreacting after a couple of tournaments, and you’ve had hundreds of points to see how it works. While I think that the overtime rule is a major success, I think I would call this new opening rush a wash.

It does what it sets out to do- it stops players from colliding with each other at full speed. The risk of bumping knees or shoulders is a lot lower. You don’t have to enforce players sliding into other players trying to get a ball, something that was poorly reffed in the past (players would almost always get a warning or two when serious harm could be done the first time.) Just look at this season of The Bachelorette for an example. 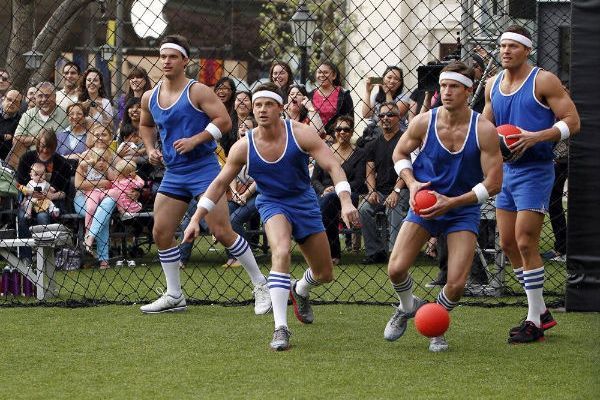 Desiree made her guys compete in a dodgeball game outside with NDL rules (the NDL sponsored it) so it had the old opening rush. Featuring two former professional baseball players it was actually decent dodgeball, minus the whole strategy thing. On one of the opening rushes however, Brooks goes for the ball and is run into by a player, breaking his finger. Now, it wasn’t terrible for Brooks, he made it all the way to the final three before deciding to quit (or did he quit? Find out on Monday!) but it goes to show that injuries are there with the old opening rush.

However, there is a negative aspect of the opening rush as well, mainly that there is often one or two players K.O.’d right off the bat. This really changes the strategy of the game as well, because you can’t risk having a top-tier talent go up and get a ball if he has a decent shot of being taken out right off the bat. For example, MSU had a player named Ray Matiyow, who was one of the fastest players in the league. He had a 4 (on a scale of 2-8) throw, 6 or 7  catching, and plus-plus speed (if you’re going to use baseball scouting terms). As his captain, I knew I could put him against anyone in the league and 90% of the time he’d come back with two balls. He was a major weapon, not only because of his transition game and great catching, but just a guarantee of at least two balls on the OR was key. We’d come up with at least 6 balls against anybody in the country not named Central Michigan, giving us a fairly decent advantage to start off games. His last season was the first of the new OR, and while he still was a great player, the new OR sort of neutralized his speed. He could cruise to the first ball, but it’s basically a 50/50 for the second ball at that point, while before it was almost a given he’d get both.

Another example would be a player like Mike McCarthy. Dude’s got wheels, but he’s also a top 10 player ever in my estimation. In the old opening rush, he could afford to go up there and get two balls and not have to worry about it. If I was his captain now, I would seriously consider telling him not to run, despite being a roadrunner. It’s just too much of a risk to send a top-tier player to get a guaranteed ball and have a 50/50 ball in the middle when they could easily get out. You could have someone with just average speed or slightly above average speed get the first ball now and attempt to back someone down for the middle ball. As important as ball possession is, it’s not worth sacrificing one of you best players to get a ball in the first 10 seconds of a point.

Another problem with having your speedy guys go on the OR (especially if they’re great players) is that if they’re out, you have to wait to get a catch to bring them back in. So if McCarthy gets taken out 5 seconds in, it could be a few minutes before you get him back in the game. It also “wastes” a catch sometimes if your player is being too aggressive on the rush and gets stupidly taken out. So if your average player gets taken out trying to get the second or third ball, and then your best thrower gets taken out right after on a team throw, you get the average player back when they never should have gone out anyways.

There are some positives to the new OR though. From a fan perspective, it makes things interesting instantly. With the old OR, it was a bit of a slow dance to see who would make the first move. With the new OR, teams are going after one another near instantly. The strategy is different than just have your 10 fastest guys sprint to a line and back, you have to decide if some players are expendable or not to get a ball. There’s the factoring in of  who can get the first row of balls quick enough to have a chance for the middle balls, but you have to decide if those players getting out would harm the team too badly. It sort of neutralizes speed a bit, but transition dodgeball is still a part of the game so speed will always be a major factor.

Basically, as I get to word one thousand in this post, what I’m trying to say is….I don’t have an opinion. It’s no better or worse than the old opening rush in my opinion, just different. It’s safer and requires some actual strategy, but it takes away some of the players’ skill sets. If anyone has any points/counterpoints on this issue, feel free to comment below, or if you have any other questions feel free to tweet at me at @NCDASam.

5 thoughts on “OPINION: Thoughts on the Opening Rush”