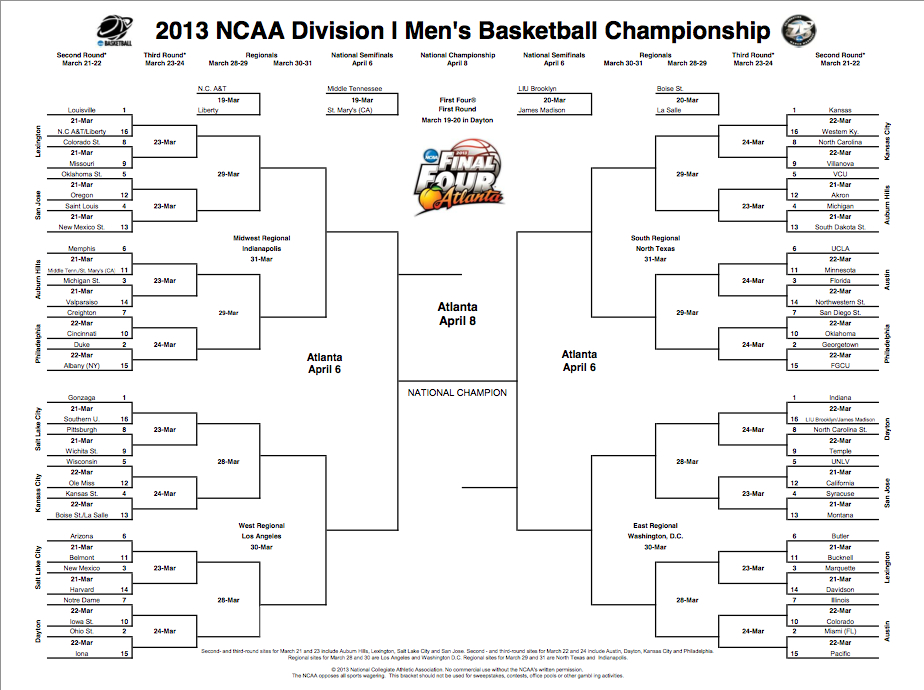 JMU has the lowest seed of any NCDA team in the tournament, and they play LIU-Brooklyn in one of the play in games. They play on Wednesday, and the Dukes are the Colonial champions. This is their first appearance in 19 years. JMU ranks in the 200s in the major offensive categories, and their best scorer is Rayshawn Goins (averaging 12.7 ppg.) They play LIU-Brooklyn, a team who lost last year in the first round to Michigan State. The Blackbirds are typically a lot better at home (they had one of the longest active home winning streaks this season) and they are a dynamite offensive team. They have two players averaging over 16 points a game, and they average 79.5 ppg. However, they can get bullied, and JMU will have to do that if they want to advance to play #1 Indiana. The chance of JMU upsetting IU is probably 1%, as no one seed has ever lost to a sixteen seed, but this is March Madness and crazier things have happened.

#16 WKU plays #1 Kansas, and this doesn’t look good for the Toppers. They are poor offensively (187th in FG%) and they average 15 turnovers per game. KU can get out and run, and Jeff Withey can dominate the paint. Kansas also has a lottery pick in Ben McLemore on the wing. Once again, no 16 seed has beaten a 1 seed, and this doesn’t look like the spot you’d see one. WKU won the Sun Belt and finished 20-15. The Toppers have had tournament success before, but its hard to see them copying that this season.

Northwestern State went 23-9 on the season, good for a #14 seed, and they draw one of the streakiest teams in basketball in #3 Florida. The good news for Northwestern State is they play the fastest tempo of any team in the country, whereas the Gators play the 299th slowest of any team in the NCAA. However, Florida ranks in the top 5 in both offensive and defensive efficiency, and are actually one of the unluckiest teams this season (ranked 337th.) Northwestern State has gone to the tournament as a #14 seed and knocked off a #3 seed, but this Florida team is a lot better than that Iowa team was.

VCU is a five seed, which is a historically dangerous spot for a team to be in as twelve seeds are usually a solid mid-major or a dangerous Power Six team. The Rams draw Akron, a team who went on a major winning streak this season and won the MAC. However Akron’s starting point guard is suspended due to a drug trafficking charge, so that benefits VCU. VCU went 26-8 in the A-10 this season, a tough conference, and made it to the A-10 Championship Game. They destroyed Butler by 32 points and defeated Memphis. Shaka Smart also has gone 13-4 in postseason tournaments the last 3 seasons, proving that he’s an elite coach. If they get past Akron, then they’ll draw either Michigan or South Dakota State, two teams who have elite point guards. VCU plays in Auburn Hills, MI, so a battle with UofM could be like a road game.

#4 K-State may not have played a dodgeball game in the last couple of years, but they’re still a member team, so I put them on this list. They split the Big 12 regular season conference title with Kansas, and they have a win over Florida on their resume. They played a weak non-conference however (222nd in the Nation) but they don’t really have any bad losses. Their first game is against the winner of Boise State and LaSalle, which could actually be a tough one (Boise gave MSU a run for their money in East Lansing, LaSalle has historically been a good team) but they should be able to advance. Their next game would be against #5 Wisconsin, a team that could really bother them with stifling defense and perimeter shooting, or #12 Ole Miss, who has the craziest player in the country in Marshall Henderson.

#3 Michigan State has had plenty of big moments in the tournament in recent years, and every player to play four years for Coach Tom Izzo has made the Final Four. However, they need to make it either this year or next or this year’s Junior class will not have made it. State played the toughest schedule of any team this year, they have a lockdown defense, and they might have one of the best one-two punches inside of any team. They draw a #14 Valpo team from the Horizon league who could definitely take the Spartans, but they’d need to play a complete game to do so. If MSU advances, they play the winner of #6 Memphis and the St. Mary’s/Middle Tennessee State game. Watch for them to make a long run.

#2 Ohio State just won the Big Ten Championship, which helped their seeding but may tire them out a little bit. The Buckeyes are a great defensive team, with Aaron Craft leading the point, but outside of Deshaun Thomas (the Big Ten’s leading scorer this season) they are a little weak offensively. They play an #15 Iona team out of the MAAC who can score in bunches, which is an interesting matchup. Assuming Ohio State gets out of that one, they get #7 Notre Dame or #10 Iowa State in the second round, two teams that play extremely different styles of basketball. Overall it looks like a great draw for the Buckeyes, who could make a run for a title.

#1 Louisville’s dodgeball team may be near extinction, but their basketball team is rolling. They are the top #1 seed overall, and they play an amazing press defense to go along with a solid offense. If Russ Smith plays in control, they can win a title. They lost to Duke earlier in the season, but that was without Gorgi Dieng, and they’ve won 11 of their last 12 games, including the Big East Championship Game. They draw the winner of North Carolina A&T and Liberty (a team with 20 losses) and then an interesting matchup with #8 Colorado State or #9 Missouri.

Here’s what I have for NCDA teams in my bracket:

4 thoughts on “NCDA Teams in the NCAA Tournament”