The fourth annual MSU Invite is the next big tournament on the NCDA docket after the Maryland Invite, and it should be a great one. Hosted by the Michigan State Spartans, they will be joined by Bowling Green, Central Michigan, DePaul, Kent State, and Moody Bible Institute. All six teams attending have played at least one match against a team in the tournament, but none of them have played matches against teams in their pool. The tournament is split into two separate three team pools, and everyone plays everyone in their pool. Then the first place team in each pool plays each other, the second place teams play each other, and the third place teams play each other.

In Pool A are the Spartans, Falcons, and Blue Demons. All three teams have been in the league for a long time, including two of the founding members of the NCDA in DePaul and Michigan State. Bowling Green went 1-2 this past weekend in their home tournament, beating Miami (OH) but dropping their matches to Central Michigan and Grand Valley. The Falcons have traditionally had success over DePaul. At the 2010 MSU Invite (which actually featured the same Pool A as this year’s,) BGSU was able to pull off a 7-0 victory, and at Nationals 2012 they beat DePaul 4-3 in OT. The Falcons also have played well against Michigan State, but not well enough to get a win since Nationals 2008. However, they seem to always get the jump on the Spartans and usually take a slight lead in the first half. DePaul shocked some people by beating MBI in the season’s opening match, 3-1, as the Archers were possibly the favorites in the Illinois region. While DePaul is usually geared to just having fun, it seems like the past couple of seasons they’re also trying to compete a little bit as well. They definitely have some talent, and they could sneak up on the Falcons and Spartans and take this group if they play smart and want to win it. Michigan State is probably the favorite for the group. They are 3-1 on the season, with a loss to Kentucky but wins over SVSU, OSU, and Kent State, and they will get some more varsity players back that they were missing in the OSU Round Robin. State is the two time defending champion of their own tournament, so they would love to defend their title. If MSU can get out of their group, look for them to have a hard fought match to win the championship though.

Pool B has Kent State, Central Michigan, and Moody Bible. Kent State had a slightly disappointing finish in the OSU Round Robin, in which they went 2-2. They did however score a point on UK (they were the only team to do so) but they also were out performed by MSU and needed OT to beat a depleted SVSU team. Still, Kent State should have some momentum going their way if they can play well at the Maryland Invite, and they have the talent to win not just their pool but the whole tournament. Central is 2-1 on the season, but were demolished by rival Grand Valley 8-1. They have some very talented players, but they need to have their 5-20 players step up and support their top five players. If that can happen, they too are a team who could win the tournament. MBI dropped their first game of the season at home against in-city “rival” DePaul, but they should be ready for a bounce back performance at the MSU Invite. However, with such hard opponents on their schedule, they could still play great and go 0-3. Central has historically played well against both Kent State and MBI, but with such a new roster, that could change. MBI and Kent will be meeting for the second time, as the Golden Flashes took down the Archers 6-0 at Nationals last season. All three teams were in the same Nationals pool last year as well, so it will be interesting to see who wants it more.

There is the potential for some rivalry games as well in this tournament. With the possibilities of Moody/DePaul, BGSU/Kent State, and CMU/MSU in the crossover rounds, there could be some fireworks in East Lansing on November 4th. MBI and DePaul played once already, and despite being the friendliest rivalry in the NCDA, both sides will still want to pick up a win. BGSU/Kent State are in-state rivals as well, and they play often enough to the point that neither side is overly fond of the other. Kent has won the last two matches by a combined 6-1, so BGSU will be wanting payback if given the opportunity. CMU/MSU is one of the hottest contested rivalries in the league. As Bryce Corrion pointed out, CMU has beaten the Spartans in 9 straight games. 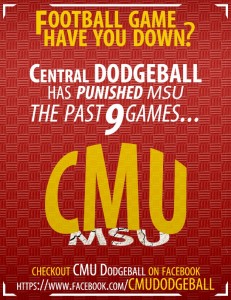 But, out of those nine games, they’ve been decided by about 11 points total. So MSU definitely wants to pick up a victory over the Chips if they get a chance.

The MSU Invite will be a good barometer as to how good these teams can be this season, and it should be yet another great tournament for the NCDA.

One thought on “MSU Invite Preview”