This past weekend I traveled to Rochester, New York to play in Elite Dodgeball’s Throwdown tournament.  16 teams from all over the United States invaded the campus of Rochester Institution of Technology to see who could claim bragging rights for their team, and for their region.  At the end of the day the winner of both the non-pinch and the pinch division, was DOOM a team from Los Angeles, California.

This tournament that was hosted in New York, is only comparable to a nationals tournament for me, players from all over the USA coming together to play dodgeball together and try to reign supreme over their peers.  I personally got to talk to players from California, Texas, Arizona, Maryland, D.C., New York, Illinois, Missouri, Michigan, Massachusetts, and Virginia. It is great to be able to see there are people all over who love dodgeball as much as myself, and my friends at the NCDA.

Elite Dodgeball is a rapidly growing league that began when they hosted their fist “Elite 8” tournament on December 10th 2011.  Elite Dodgeball’s mission follows:

“The Elite Dodgeball Invitational is a tournament for dodgeballers by dodgeballers.  Our goal is to bring the sport into the mainstream by showcasing the best of the best.  The tournaments are invite only to the most elite teams around.   We wish to provide tournaments that are organized, fun, competitive, and not for profit.”

I got the opportunity to talk to Elite Dodgeball co-founder Mark Acomb.  I specifically wanted to ask him what was the drive to start Elite Dodgeball.

“Back in 2011 I had attended a tournament that was god awful.  I had been playing for over three years and frankly I was really feeling like I wish there was more, and if I could only find a tournament or organization that had the interests of the players in mind.  I was working a job that payed not a lot of money so each tournament was an investment.  When I would pay over a days wages and get only a handful of games I thought it was ridiculous.  So I called a few of the team captains who had also expressed the same sentiment to me, and I asked “what if”.  I proposed that if we all got together I would host a tournament. If everyone chipped in for the cost, I would handle the rest.  We wanted it to be like a poker night with buddies.  Everyone throws in a little cash to pay for beer, snacks, and whatever.  The rest of the money would go to the winner.  Plain and simple we wanted a tournament where all of us as friends could play”

“After that tournament, we decided that this could be something we could build on.  Be transparent and open with the players and we could build something on respect.  Most of all, it wasn’t about making “Elite” the next big thing.  Rather it was about creating new teams, helping current teams brand themselves, and uniting them.”

Recently Elite Dodgeball has taken steps to further the league and has announced its National Championship series, which features multiple events in each of its 4 regions. The top 4 teams in each region after the 3 events will have earned a spot in the elite dodgeball national championship hosted in Las Vegas August 22-24th. 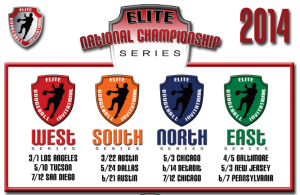 I would love to play NCDA style dodgeball forever, but with the type of numbers you need (15v 15) it is very hard to sustain and grow a league like it outside of college campuses. So, If you are looking for more outlets to play dodgeball, or if you are at the point where I am where your NCDA career is about to come to an end, you should look to get involved in Elite Dodgeball.  Personally I have attended multiple events hosted by elite dodgeball and it is a great organization.  The members that host and participate the elite events has the same massive enthusiasm for the sport of dodgeball that we have here in the NCDA.

While the rule set is different and will take a small adjustment to get used too, I have yet to find any other place where I can play at a high competitive level and still use 8.5-inch rubber dodgeballs.  It is played on a court that is about the size of a volleyball court and is a 6v6 format. Games are best of 3 no time limits, a point is recorded when all players are eliminated. The single biggest rule variation in terms of game play is how blocking works, a blocked ball is still alive and can record an out if it hits a target, and it can be caught.  Balls only become dead if they hit the ground/walls or contact a non possessed ball.   Lastly, as mentioned earlier in the article there is both pinch and non-pinch divisions at each event.  The rule set allows for much more talent to be put on display, and it is always quick paced and high action, the court size allows for any player to make any throw.

I think that it would be great to see more college teams get involved during their down time from scheduled NCDA action, as well as summers, and post graduation.  It is the perfect opportunity to show the talents that we have developed playing the NCDA style of dodgeball.  Elite is looking for the best players out there, and players who have grown through the NCDA would be great to continue to grow Elite Dodgeball.

“Overall our end goal is to get the sport back on Television the right way.  Where the players are insured, paid, and respected.  In the near future we want to be able to host dodgeball tournaments that are free, the players are compensated and have the chance to win money.  We want to make this a real pro sport.”

I hope to continue to see many members of the NCDA beyond graduation, so check out Elite Dodgeball, because I will be out there on those courts until my body can no longer play the great sport of Dodgeball!

If you want to learn more visit their website: http://www.elite-dodgeball.com/

3 thoughts on “Dodgeball Outside of the NCDA: Elite Dodgeball”