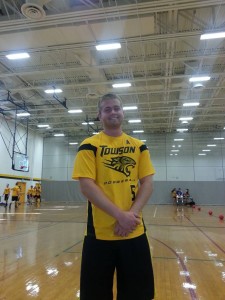 Joe Tobin has been a staple of Towson’s Dodgeball team since our inception into the NCDA. He was the first of us to successfully pick up on what pinching is, and since then he’s cannon of a right arm has been taking people out all over the place. Even when Towson has bad games, Joe has consistently been there to help pick us up or bail us out of bad situations. With his selection of July’s Baller of the Month, I had a chat with Joe to see how he feels about the nomination, among many other things.

SS: How does it feel to be Towson’s second ever BOTM?

JT: Initially, I was surprised to hear I won the award especially being picked from a large field of other competitors from around the league. In being the second player from Towson, I feel it’s a large boost to our program knowing that our team is being recognized now as a serious competitor, not just in the Eastern Division but also the NCDA together. Jon Shaw, being the other Towson player picked, has always been a huge component to our team. With his leadership, his desire to win and his intensity has always seemed to help bring an edge to the rest of the team that nobody else, at least that I’ve seen, can match. Hopefully, I’m only the second player picked from Towson, and not the last.

SS: Alright so 2014 was your first chance to experience nationals as a player, what’d you think?

JT: To this day I still boast to people about how great the weekend was. Being able to see all the competition from around the league really opens up a perspective of the amount of talent around the nation. For Towson’s point of view, I think it really improved the players on our team for they were able to face against different teams such as Saginaw Valley and Ohio State. THe experience gained against these teams was a style of play outside of the main teams we always face over on the east coast in Maryland and JMU. Outside of the competition, just meeting the other people and players around the league was a bonus in itself.

SS: You mention the teams we played, what do you hope those teams took away from playing us, and you specifically?

JT: All I hope that these teams take away form Towson as a contender in any match up that we play. Against teams like Grand Valley, and Saginaw and JMU I don’t think we’re quite at their level, but then again I would like to think that we will go into a match with anyone and keep the matchup competitive. We don’t have the type of guys on our team that will just aly down for a team or wait the time out just to get the match over with. We have the type of players on our team that will fight to the very last second no matter what the score might be. Me personally, I would like to feel that I lived up to the hype that has been built around my play. Around the league I’ve been known to have a strong arm and I love showing people that I live up to the title. Not just Nationals, but after most tournaments I figure some opposing players are leaving with some colorful bruises courtesy of some kickball I threw (Sorry! Be sure to show your friend). So hopefully after this tournament I lived up to some of the hype surrounding my throwing.

JT: As I come into my last season with the team, what I really hope is that the team is left in good hands and will be maintained after I have graduated. Sean, you run and outstanding program and I don’t think anyone could be doing a better job here. Towson dodgeball is a great club on campus and I’ve met most of my good friends I have at school through it. Competition wise, the one thing I hope to accomplish in my last year is to beat JMU. For three years, they have been beating up on our a**. Don’t get me wrong, they have some great people down there, but it would be somewhat of a high note to walk out on my last year. Ben, Brent and the other leaders run a fantastic club and every year it just seems as if they keep getting better and better and I personally believe, as tough as the feat appears, a victory over them would be huge for our team’s morale, or any team’s moreale (I.e. Maryland’s victoyry).

SS: Alright, which team will you miss playing the most and player(s) you will miss playing against/with the most?

JT: Like I said earlier the people at JMU are great! Every time we go down there or when we meet elsewhere, they’re always a fun bunch to be around. I’d say the team we’re most competitive against, and the team Towson always seems to have the best matches against is Maryland. Dylan and Tyler run a great team down there and everytime we match up it feels as if the intensity on both sides is amplified throughout the entire 50 minutes. I’d say TU and UMD have built one of the more competitive rivalries in the NCDA.

SS: Alright as for players?

JT: Definitely everybody on our team. Like I said earlier, I’ve made most of my friends at tschool through the club such as Jon Shaw, Luke Search, Trevor O’loughlin, Troy Bennett and Nick Coates to name a few. Playing against, I would have to say Brent, Ben and Connor from JMU and Dylan, Tyler and Rohan from UMD. These guys have helped make the matches competitive, but at the end of the day still help keep in check that we’re adults playing a kid’s game. It’s easy to get carried away at dodgeball and I think most people can agree that we play to simply have fun.

SS: Alright now two questions just for fun. First, most people may not have heard that you’re a huge WWE fan and an aspiring wrestler, if you had a choice what would be your choice in entrance music and what finishing move would you have?

JT: Oh Lord the answer to these questions switches on a weekly basis. Music wise, one can never go wrong with Metallica. As for the finisher, lets’ be honest, I’m 5’10” 192lbs. I don’t think I’ll be body slamming or power bombing anyone anytime soon, so maybe with some type of submission or top rope move. That stuff will probably come in time though; way too early to call now.

JT: When i was younger, I’m prettys ure I hit puberty off watching Trish Stratus every week on WWE. As of now, one could never go wrong with Kate Upton. I mean, thanks be to S.I. swimsuit edition.

Normally I don’t do this but since I’ve known Joe since our Freshman year I’ll add a bit of a personal note to finish this off – Joe’s been one of my best friends to play against the last three years. It’s always fun when I can tell me friends at home that think I throw hard that when they get a chance, come to a came and watch Joe throw and they’ll know crazy things are in comparison. As his teammate, I hope he gets a chance to play against as many teams as possible before he graduates, knowing he missed two chances at Nationals due to various reasons. Finally, there are two people in this club that we couldn’t survive without, Joe Tobin and Jon Shaw.