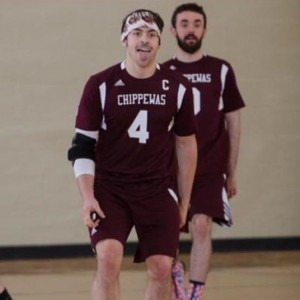 The Baller of the Month for March goes to one of Central Michigan’s captains: Brett Hadwin.  Brett is competing in his final season with CMU, and he has had a stellar final year.  Brett most recently led Central to a tournament title at the CMU Showdown with wins over MSU, SVSU, JMU, and GVSU.

Brett is without a doubt one of the best all-around players in the NCDA, and he has proven it time and time again throughout his career.  It is a shock to me that he had never received the honor of BOTM until now.

I had the opportunity to interview Brett after he was chosen as the Baller of the Month, and as always, he had some interesting things to say.  Here is my conversation with Brett where we talk about his goals for his team, his individual skill set, best dodgeball memories, and even his trademark headbands:

Kevin Bailey: First off, congratulations on winning Baller of the Month!  Your team is coming off a tremendous performance at the CMU Showdown (including wins over two previously undefeated teams).  What do you think was the reason for your team competing so well at that tournament?

Brett Hadwin: Hey, thanks to the content team for picking me. As far as our tournament goes we have always known we have the talent to play and beat anyone, the problem was putting all our pieces together in a single game. We have this saying on our team we say don’t go super saiyan, which basically means play within your head. I am probably one of the most guilty of this on our team, it’s suppressing that rush of you just caught a big arm then you want to immediately go and throw another person out so learning to suppress that and play good team ball and nailing down our strategy I think was the key to our home tournament. I mean it doesn’t hurt that we had our home crowd there too cheering us on.

KB: As an individual, you are often recognized as one of the best all-around players in the league.  What do you think is the main reason for your individual success, and what would you say is your biggest strength (or strengths) as a dodgeball player?

BH: I think one of the keys to my success as a player was the order in which I developed and when I got to the league. As a freshman I walked in the gym and had to face arms like Pat Fisher, Bryce Corrion, Eric Sweet and Mike McCarthy. So it was learn to catch or die basically, and Wes is also a testament to that. Them also being there let me focus on catching and blocking, throwing wasn’t even an option. Then as those guys moved on I had picked up a great understanding for the game and we got into “the dark times” of Central Dodgeball.  I had to start developing as a thrower and had to keep that winning spirit from winning it in 2011 even though it was hard at times, but now in my fifth year I think all those things are hitting a stride along with the other 14 guys on the court with me makes it easier to play at a higher level.

KB: What are your expectations for Nationals (both for your team and yourself individually)?

BH: Well I’d be lying if I didn’t say I expect us to win it all. I think the CMU Showdown showed that we are capable of doing it (sorry Kevin) and riding that momentum every day at practice that we still need to improve but we can do it and we want to work that much harder to make it happen. On a personal level besides coming in my freshman year winning then going out with the win at Nationals, I really want to savor my final games of dodgeball.  I want to be able to look back and to have enjoyed every second of it and know that I left everything on the court that’s really all I can do, and hope for the best and if I can get all 20 of us to do that I believe we will bring home that title.

KB: You are known to wear headbands / other accessories while playing dodgeball.  Is there a reason why you work so hard to be the most stylish player in the NCDA?

BH: Everybody has their pregame ritual, it just so happens mine carries into the game as well. I think it started in high school. During football season I would always wear the opponents colors under my jersey as motivation and that’s how the bandana thing started then I started to find some fun ones and tried them out.  Also not a lot of people know this but I was a swimmer and almost went to Grand Valley to swim but in high school I was the guy that wore outrageous, bright colored and loud speedos so it’s just something I’ve always done. Plus you look good, you feel good, you feel good, you play good, and if you play good, you are good.

KB: Your career at CMU will end in a few weeks at Nationals.  What teams have you enjoyed playing most throughout your career, and why?

BH: Thanks for the reminder Kev… I know I’m getting old haha. I think the better question is who don’t I like playing because that list is a lot shorter. I love playing MSU and GV because they are always good games and being instate rivals there is always more on the line. Outside of that I love playing teams where people either think we are going to lose or that it’s going to be a close game because it’s just more motivation.

KB: Last question: When you look back on your career, what do you think will stand out the most about your experience as a college dodgeball player?

BH: Well I hope I will be remembered for being a good player. But mostly I want to be remembered for reviving CMU Dodgeball and being a part of the new era of it where we completely redid the leadership and responsibilities of those who want to be more than just a player, and want to see and be a part of how the team grows and continues to get better. Also spoiler alert, and if anyone does this I’m going to be pissed: Hadwin Bandanas after graduation wants to buy a better trophy that’s bigger and nicer and call it the “Hadwin Cup” so I can be remembered for years and years to come in collegiate dodgeball. Remember who said that first! It will hopefully be unveiled at Nationals 2016 so stay tuned!

Some additional comments I’d like to point out are mostly to younger guys.  Get involved in the league.  My previous years, I never wanted to talk to anyone because they were the enemy and I cared about nothing but winning games. Now don’t get me wrong, all of the competitive aspects of the game were why I got involved and still hold true, but these last two years being more involved and talking to more people on other teams.  I wish I would have started earlier, because no one is running this league for us.  It’s all dodgeball players that want to see the league grow and continue to gain teams and actually go legit one day.  It’s up to you young guys to continue this and keep pushing. But I’ll get off my soapbox now and just want to give a shoutout to my team.  Without you guys I wouldn’t have been able to be where I am, and also see everybody in Bowling Green, KY for what I think will be the most exciting Nationals since 2011.