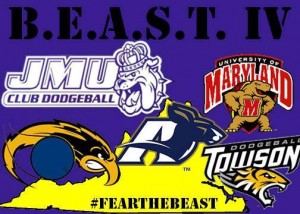 This Valentine’s Day marks the fourth installment of arguable the most important tournament on the East Coast every year. The Big East-Appalachian Super Tournament, commonly known as the BEAST, has played host to some of the best lineups in its previous three installments. This year, due to the Michigan Dodgeball Cup happening at the same time, there will not be another “top-tier” team (usually considered the four main Michigan schools and JMU) joining JMU’s home tournament this weekend. What the tournament does have though, are the three biggest teams on the East Coast, which has been gaining a lot of traction in a lot of people’s minds, in JMU, UMD and Towson, Ohio power Kent State, and NCDA newcomer Akron.

This tournament will give each team attending a great opportunity to learn a lot of things they have going for them, and what they need to improve on in preparation for Nationals in April. Going on that, here is a game-by-game preview and prediction of how I think things will go.

9:00AM:
Akron V. UMD – Much like I currently know nothing about Kent State, I know just as little if not less about Akron. What I do know is UMD’s typically methodical method of play, going for ball control and selective picking apart of the opposition. Akron should be a very knowledgeable team having already gotten their feet wet in NCDA play and having an experienced league player in Sam Saccareccia as their leader. That being said, I think Maryland’s catching ability as a team, and enough solid arms like big gun Rohan Mittal will prove too much for Akron in their first match of the day.
Prediction: UMD def. Akron 4-1

Kent State V. Towson – This match, as well as UMD’s match against KSU which I’ll get to later, is extremely hard to call. Towson and Kent haven’t played yet this year, and the Tigers don’t know much if anything at all about the Golden Flashes. Kent does have an advantage with guys like Albert DePerro having played TU in the past and having a good idea of what they’re about. Also, I have heard that Kent is a pretty solid catching team, which is well known as Towson’s kryptonite. Granted, Towson is bringing back Joe Tobin, who wasn’t able to attend our last tournament, a fully healthy Jonathan Shaw, and bringing two relatively unknown stud players in Mitch Seifert (Senior – #99) and Mike Hinely (Freshman – #15) who do have the capability to bail Towson out of most situations, especially when working in sync with each other. I think for the first time these two teams have played each other this is officially a “pick ‘em” type of game, but unfortunately I think Kent’s catching will overpower Towson’s arms. Granted, I really hope I’m wrong.
Prediction: Kent def. TU 3-2(OT)

10:15AM
JMU v. Akron: This is going to be a tough weekend for Akron in my mind. Thankfully, they get their match with JMU out of the way early in the morning. I don’t normally want to say matches have the potential to be considered a beatdown after it’s over, but I think this will be one of them. One thing JMU hears every year usually until the BEAST or whenever they’re able to head to a tournament featuring high-end talent is “yeah they’re undefeated, but they don’t play anyone outside of the EC.” I can’t speak for the guys on the team, but from my own experience in the past, the Dukes don’t take kindly to being told they can’t do something. While Akron hasn’t been one of the contributors to this discussion, I think JMU will want to end this game early in order to rest their top guys for the match we all know is tops on their minds (Kent State). Akron will hang tough in this game, but as previously stated I think this game will be over quickly.
Prediction: JMU def. Akron 8-0.

UMD v. Towson: It’s safe to say the marquee matchup of BEAST IV is going to be JMU v. Kent State, Maryland vs. Towson is the second best game on the docket. If I had to compare these two matches in terms of importance to the teams, it seems like UMD v. Towson and JMU v. Kent would be like having the Foo Fighters (in their prime) opening up for Jimi Hendrix (in his prime). Now, dated music references aside, the match between the Terps and the Tigers is shaping up to be another close, highly contested match. The last time these two teams played Towson was missing their best player in Joe Tobin, but still forced Maryland to make a second half comeback in order to win. This time, Towson has Tobin, but is missing two of their best catchers in Sean Smith (extremely limited due to coming off injury) and Scott Delawder. Because of Maryland’s ability to catch, especially in the clutch, this game has a strong possibility of going back and forth much like previous matches. I think this is yet another pick ‘em type of game. This time though, I think Towson begins to take back the Old Line State bragging rights.
Prediction: TU def. UMD 3-2(OT)

11:30AM
JMU v. Towson: Traditionally, Towson plays JMU tough, but doesn’t have what they need in order to dethrone the East Coast powerhouse. Since I thoroughly expect JMU to be on a mission to make a statement this weekend, I think the past history will prove true once again. This game won’t be over as quickly as JMU’s match against Akron, but the Tigers will be drained after two grueling matches, and the Dukes will be fresh having only played one match leading up to this one. I believe JMU will win by a clear margin, but I also believe Towson will get their first major positive against the Dukes this season and steal a point from them before the match is over.
Prediction: JMU def. TU 5-1

JMU JV v. Kent: No preview given due to lack of knowledge on how seriously this match will be taken.

12:45PM
UMD v. Kent State: I’m actually extremely happy I get a chance to watch this game while my team is on a break. More than likely I will be helping officiate this game, which in most cases means I should not give a prediction, but since I know I will likely be nothing more than a shot clock counter (Jonathan Shaw will likely want to be head official, clearing me of most bias), I still will. I don’t want to predict three overtime games in one tournament, but this game could likely head that way. Whether it does or does not, I believe this will be an extremely low scoring match. Both teams seem to be proficient in catching, with the ultimate question being who has the better arms to really swing the match. This game will be highly contentious, with almost as much controversy as a typical UMD v. TU match, but in the end I think the Terps pull it out. While I have listed Kent as defeated Towson earlier in the day, I think Maryland’s victory of Kent could/should/will solidify in people’s minds that the East Coast is no longer “JMU and everybody else.”
Prediction: UMD def. Kent 2-1.

JMU B v. Akron: No prediction given for the same reason as earlier stated.

2PM
JMU v. UMD: If Towson is known for playing JMU tough, Maryland is known for giving the Dukes the most trouble any East Coast team can offer them. A lot of people who only heard about UMD beating JMU last year at UMD was an indictment against JMU’s overall ability, but this year has proved otherwise. Let it not be forgotten that when UMD pulled off the major upset last year, JMU had a mostly JV roster. That being said, even Maryland isn’t the same team as they were last year. They’re much better. Whenever JMU beats Maryland it’s because of an overall higher level of talent on the Dukes roster compared to UMD’s. Maryland’s best hope in this match is their best known strength: strategy and team cohesion. If UMD wants to pull off a truly epic upset, they’re going to have to do whatever they can to get inside JMU’s heads and frustrate them beyond belief. That being said, I don’t see JMU losing this one.
Prediction: JMU def. UMD 4-2

Akron V. Towson: This is going to be an interesting match. Towson is a highly improved team than they’ve been in the past, historically Towson has played down to the level of their competition. I don’t think this will happen, but knowing the Tigers have never beaten the currently defunct Miami (OH) team, it’s tough to say Akron doesn’t have a shot in this match. Saccareccia’s experience for Akron and element of mystery will also have a lot to do with Akron’s ability to hang around. This will probably be one of Akron’s closer matches in the day, but I do believe they will ultimately fall to Towson.
Prediction: TU def. Akron 4-2.

3:15PM
JMU v. Kent State: This is likely going to be the match of the day at BEAST. While it may not have the publicity of any, if not all of the matches going on at MDC, let me be the first to state this is going to be an extremely heated match. JMU was absolutely livid about what happened last year at BEAST III in their overtime loss to Kent. Granted, Kent isn’t the same and yada yada I’ve already said all of that. I could sit here and preview this game all day and all night, but there’s really no reason to. I’ve already called two games “pick ‘em” games but this one I honestly have no idea what is going to happen. One minute I want to say JMU is going to win by a margin of a few points, but then the other side of me knows that Kent just seems to have their number whenever they play at JMU. Knowing I have to make a call on this one, I believe that JMU finally takes out Kent in front of their home fans, and makes sure that nobody outside of the tournament has the opportunity to pick up some fresh ammo (granted it’d just be reverbing everything they would normally say).
Prediction: JMU def. Kent 4-2.

JMU B. V. Towson: No prediction given.