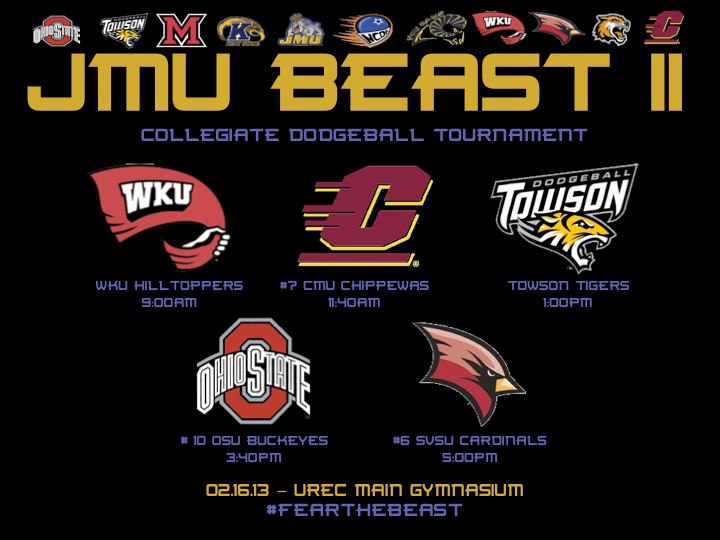 The Big East Appalachian Super Tournament II, aka the BEAST II, is the biggest regular season tournament this season in terms of teams attending. In fact, it’s bigger than Nationals 2009 at Grand Valley! With 10 schools going, it will be a monumental task for any team to pull out the championship, as most teams will be playing five games. Hosted by James Madison University, it also includes Saginaw Valley, Central Michigan, Ohio State, Kent State, Towson, Virginia Commonwealth, Rochester Institute of Technology, Western Kentucky, and Miami.

The host school JMU may be the favorite to win the whole thing. Their schedule is as follows- WKU, CMU, Towson, OSU, and SVSU. The Dukes will be getting an interesting look at some of these teams, as WKU, CMU, OSU, and SVSU all value ball possession as much, if not more in Ohio State’s case, as JMU. If they can keep ball possession like they did at the CDO, then they can go 5-0. They need to limit their solo throws as well, as they have two of the best catching teams on their docket in CMU and OSU. If CMU brings a full 15 man roster and SVSU brings their best 20, then they could take down the Dukes as well. However, James Madison should have their top 20 at home, and they’ll be tough to beat. They have the power arms and blocking to stand toe to toe with the best, so watch for them to play extremely well.

Kent State will be coming off the Ohio Dodgeball Cup, and they too will have a difficult schedule: SVSU, WKU, OSU, CMU, and RIT. Kent beat SVSU 2-1 in OT in October, but that was a Saginaw team without some of their top players. They’re coming off a solid performance at the ODC, where they dropped just one point the entire tournament. Just like JMU, they’ll need to get ball possession and not throw catches if they want to go undefeated at the BEAST II. However, they will have one of the best players in the tournament (Camden Fullmer #13-C) and they’ll also have the experience to win the BEAST, as they did so last season.

Saginaw will be playing a week after their battles at the MDC, so it’ll be interesting to see how they play after a draining tournament. If they bring their top 20, they could win this thing, but even if it’s a mixed varsity/JV roster they have a shot. To win the tournament, its going to have to be a solid team effort. Spencer Jardine (SVSU #77) gets a lot of praise for his play, but it’ll have to be the 10-20 players stepping up and playing solid dodgeball if they want to win the tournament. If the top five for SVSU, who can go toe to toe with anyone’s top five, play well, but their back half struggle, then they won’t win. It’s as simple as that. Saginaw gets Kent, Towson, WKU, Miami, and JMU in the BEAST II.

CMU will also be coming off the MDC, but they may be playing shorthanded (again) as they have all season. If that’s the case, they could be in trouble with a 5 game tournament. However, they do have one of the best catching lineups in the country, with their three captains all being fantastic in the catching department. They do have a slight problem with getting kills, but the Chips can still do well in the tournament. CMU draws OSU, RIT, JMU, Kent, and WKU.

Ohio State is coming off a second place finish at the ODC, and despite not faring well against Kent State, they’re still proving to be a solid team. They have some good power throwers, but catching and defense is still their strong suit. They have a chance to win this thing, but even three wins would be critical to their Nationals groups and Sunday play. The Buckeyes will play CMU, VCU, Kent State, JMU, and Towson.

Towson just won their first round robin, the Maryland Round Robin, where they went 2-0, beating VCU and Maryland. They’ve shown great improvement over the past two seasons, and now they’re turning into a team that can pull off a few upsets and string together some wins. Joe Tobin (TU #5) is their big weapon, but they do have some talent to surround him. This will be Towson’s first time getting to play some of these bigger named schools, so it’ll be interesting to see if they’re up for the challenge. They play SVSU, Miami, JMU, and OSU.

VCU is a first year school, and they’re still looking for their first win as a NCDA team. They’re drawing some praise from other captains, and their own captain Shadeed Drakeford is trying to build them into a contender. They’ll get some games they can win in the BEAST II, but they’ll also get some challenging games. VCU plays Miami, OSU, RIT, and WKU.

RIT picked up their first win in program history (as a second year school) at the Ohio Dodgeball Cup, when they beat Miami 5-1. They were also competitive against BGSU, but not so much against Kent and OSU. If they can build off their successful games, they could pick up a couple of wins in this tournament as well, as they play CMU, VCU, Miami, and Kent.

WKU may need this tournament more than any other team. They might not win it, but they should get valuable experience and a couple of wins to improve their stock for Nationals 2013. They’ve been playing decently well this season, but they could definitely use some wins. Alex “Big Bird” Sorrels (WKU #16-C) and Felix Perrone (WKU #76-A) need to power the attack for the Hilltoppers. WKU will face JMU, Kent, SVSU, VCU, and CMU at the BEAST II.

Miami had an okay showing at the Ohio Dodgeball Cup, and have been playing a decent amount of games this season. However, a 1-10 record is probably not what they had in mind, so the BEAST II will be a chance to improve on that record or at the very least show some improvement. They play VCU, Towson, RIT, and SVSU, so they will definitely have those chances available to them.