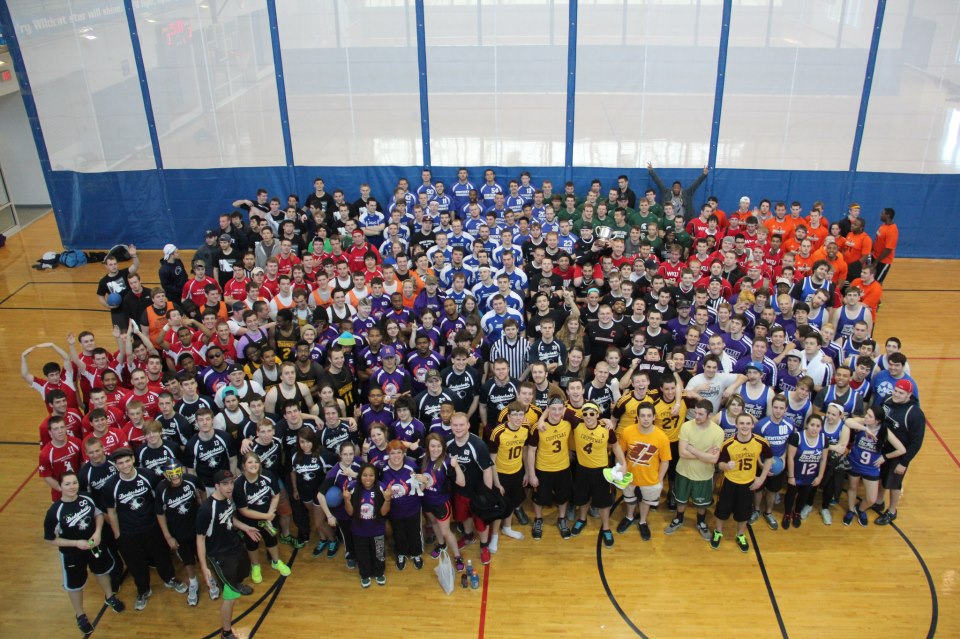 This past weekend the NCDA held its National Tournament at the University of Kentucky. This was not only my first Nationals, but Towson’s first as well. As a second year team we had wanted to attend last year’s Nationals at Saginaw Valley, but we did not have the funding available to go. This past weekend was a spectacle in my mind that can only ever be imitated, but never duplicated.

In the course of three days I met so many people from so many different parts of the country, that without this sport I would never have the chance to meet. I’ve seen a bunch of guys and girls come together to joke around while were trying to take a serious picture to pick guys up and have them crowd surf as if they were at a rock concert. I’ve met people from the north, the south, and the Midwest. I’ve even heard Ohio State sing about how they don’t give a damn about the whole state of Michigan while surrounded by four teams from the state of Michigan. Hell, I even finagled a free ride from Felix Perrone of WKU.

There are also things I’ve never experienced before that I am so happy that I got the chance to. I’ve witnessed DePaul “play” in a match (though after a point we all know they just turn it into absolute mayhem). I’ve seen a style of 1 on 1 that would put the movie Dodgeball to shame in how awesome it is. Surprisingly though, my favorite part of the weekend though, was meeting the people who made this league possible for all of us. It absolutely blows my mind that people like Aleks Bomis, Mike McCarthy, Kat Takeda, and all the other alumni who I don’t have the time to list, take the time and money out of their own pockets to help make this weekend as successful as it was. As a side note I do have to brag about catching McCarthy in the Alumni v. The World game (more credit goes to the guy who hit him in the dome though).

The one thing that makes me happier than anything about being a part of this league though is how at the end of the day, nobody takes it as seriously as we could. I’ve watched Towson’s club lacrosse, hockey, and rugby teams play other teams and still have issues with them once their game is done. Sure we have issues with each other on the court, we want to win for crying out loud, but once a match is over, I’ve never witnessed someone be the cause of anything that would be considered negative. I’ll even admit that during our last match against WKU that there were some moments where I could have taken things a little too far with one of their players. After the game though we walked up to each other, shook hands, and started joking around as if nothing had ever happened. I really don’t see another league on the collegiate level where that happens with every single team that’s affiliated with it.

The last thing I will say is that this weekend proved that the NCDA for lack of a better term is a fraternity. Unlike most frats though, new members aren’t hazed, their helped out by the elder members as much as they can possibly help. The greatest case of this being Michigan State showing a brand new team in Penn State how to play and helping them out with rules they weren’t familiar with. Hell I even spent some time coaching up Wisconsin-Platteville when they played Kent State. I also watched Felix Perrone coach up NSULA when they were playing JMU Friday night. In my mind, the only reason this league isn’t actually considered a fraternity is because we don’t have Greek letters for our name.

I wish this weekend had never ended, but I will hopefully see everyone that I saw this past weekend and even more teams next year at Ohio State!

2 thoughts on “A Fresh View on Nationals”