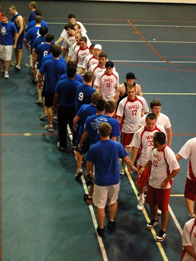 “Our players couldn’t help but feed off the fan energy,” Josh Raymer said gratefully in reference to the crowd at Western’s home opener against UK.

It was that energy which propelled Western to a 1-0 start in its third year of competitive dodgeball.

Western, who played host to just its second-ever home game Sunday afternoon, was welcomed by upwards of 150 fans at the Preston Health & Activities Center on main campus.

The raucous crowd looked on as the Toppers took a commanding 1-0 lead to start the contest.

With the lead, Western zeroed in on their second point as UK lost men rapidly.

Finally down to one opponent, Western sophomore Luke “The Sideline Assassin” Gilliam nailed UK’s final hope to tie the match at one apiece.

With a commanding 2-0 lead, Raymer, who serves as the Hilltoppers’ head coach, chose to sub in some younger players for the third point, which they lost.

“We really just lost track of our game plan after awhile,” Raymer said. “Our level of play wasn’t as strong.”

UK won the fourth point to knot the game at 2-2 by the end of regulation.

The fact that the Toppers finished the half up 2-1 and tied 2-2 at the end of regulation highlighted the impact of Gilliam’s play early in the first half.

“It looks a lot better now than it did at the time,” Gilliam said after the match. “Little points like that can make all the difference.”

With 10 minutes of overtime to decide the outcome of the match, Western’s cheering section rose to the occasion.

With chants of “Let’s go Western,” and “T-O-P-S, TOPS, TOPS, TOPS” in the background, the home team prevailed.

WKU eliminated their final opponent with time to spare, sending a message to future foes:  Don’t mess with the Tops in Preston.

Freshman fan Joshua Amos summed up the crowd’s mentality, “With the fans behind them, I knew they could pull it off.”