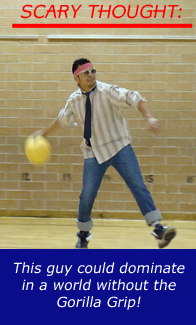 History is marked by the advancements that have propelled society forward and pushed the edges of technology into areas once thought of only in science fiction.

In our daily lives, we utilize technology so often we can’t imagine an existence without cell phones, laptops and satellite television.

As college dodgeball players, we’re often guilty of forgetting the unique advancements that make our game the highest level of competitive dodgeball in the country.

The rules, structure and traditions of this great game create a flavor of dodgeball that can only be found at the college level.

Arguably one of the biggest differences (the biggest in this writer’s opinion) between NCDA play and every other variety is the prevalence of the famous “Gorilla Grip” in our games.

Also known as “the Grippy,” “the grip” or “pinching,” the Gorilla Grip is the technique of squeezing the ball that results in faster throws and reduced accuracy (at least in the beginning).

Created by Ohio State legend Greg Funk three years ago, the grip allowed OSU to decimate the competition at Nationals and capture the championship that year.

Since then, it has been adopted by every team and is taught as a fundamental skill in dodgeball, much like proper tackling in football or hitting techniques in baseball.

During games, the biggest indicator of new players is those who throw without the grip.

So, what would the league be like today if the gorilla grip had never been invented?

This little trip down hypothetical lane provides a chilling depiction of an alternate NCDA universe.

Just imagine a game where the hardest throw zooms at you with the same velocity as a football thrown on its side.

Catches would increase dramatically and headshots would lose all significance.

Every throw that couldn’t be caught would be blocked and players could take a quick nap before having to dodge an incoming throw.

There would be no learning curve for people making the jump from PE dodgeball to the college game.

While this may seem good for acclimating new players, the most competitive souls love the challenge of mastering a sport they’re not good at right away.

A world without the gorilla grip would make it even harder to keep players from losing interest once they realized college dodgeball was essentially the same game they’d played their entire lives.

Fan interest would also decrease because, honestly, everyone just wants to see a player get drilled below the belt or above the shoulders.

A game played without the grip would be like watching professional bowling with the gutters blocked off or a NBA game on a six-foot goal.

Worst of all, the WASA dodgeballers from Wreckreation Nation would probably give us a run for our money!

That alone is enough to ensure that Greg Funk will be one of the first dodgeballers enshrined in the NCDA Hall of Fame.

For now, college dodgeball players should be thankful their game has developed its one distinct advantage over other cheap imitations.

Without it, those fogies out in Colorado really would be the cream of the dodgeball crop.