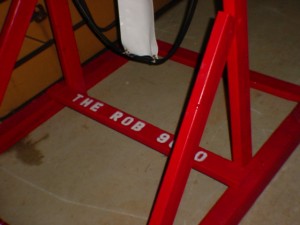 If you were to sit it out in public, it would attract plenty of confused stares. People would whisper to their neighbor in the hope of determining what exactly they were looking at.

“Is it some kind of funky armchair?” they would say. “Some piece of obscure construction equipment? A new aged torture device?!”

No, no, and definitely not.

To put it as simply as possible, it’s a pitching machine. But not in the way that you’re thinking.

It was an idea that came to me after the conclusion of last season. Our team had just completed a winless season in our inaugural year, finishing up with a thorough thrashing at the hands of Ohio State.

Despite the fact that our inexperience had factored heavily into each of our losses, our team clearly needed to improve in several areas of the game. We were getting blown off the court by teams that made better throws, dodged more effectively, and caught every ball that came their way.

This last issue struck me as the most important area of improvement for our team. We needed to become better catchers if we had any chance of finding success next season. But upgrading our skills in this department had posed several challenges to us during our previous practice sessions.

For starters, we couldn’t practice catching off a live arm for more than a couple throws before that player’s arm was completely dead. We often found ourselves skipping out on catching practice for the sake of having a decent scrimmage at the end of each session.

Replicating the speed and the unique spin of a grippy throw also proved to be rather difficult. The handful of players on our team who could actually make that kind of throw consistently were never keen about burning out their arms for someone else’s sake.

So it became imperative for me to come up with a different solution to our problem.

I got the idea for a pitching machine after returning to what had inspired to start a dodgeball team in the first place: Dodgeball: A True Underdog Story.

The training sequence in that movie featured a dual wheeled contraption that Patches O’Houlihan used to launch balls at the various members of Average Joe’s gym and torture Justin Long’s character by pummeling him unmercifully. This seemed like the perfect answer for our catching woes. Having an automated delivery system to practice with would save our arms and expose us to some serious fastballs.

So I turned to eBay to explore the price range for this particular style pitching machine. The results, to put it mildly, were jaw-dropping. Prices in the upper hundreds and lower thousands jumped out at me. Short of taking out a bank loan, our chances of getting a Dodgeball-esque pitching machine had all but disappeared.

But the dodgeball gods smiled upon our team that day. A closer examination of the variety of pitching machines on eBay revealed a style that I had never seen before. For lack of a more a precise definition, it was basically a weight bench with a large slingshot attached to the vertical poles that hold the bench press bar.

The machine’s specs said it could throw up to 70 mph and the price tag of about $80 provided a huge sigh of relief. But its simplistic design had me thinking that it might be possible to build our own and help preserve our already meager budget. An early sweep of local consignment stores made it obvious that finding an affordable weight bench was not going to be as easy as I had planned.

Despite that, my main concern was soon taken care of when I found a couple rubber exercise bands that I could use to make the slingshot. They were the quality I needed at a price that made my wallet very happy. Further digging into the wide world of weight benches led me to determine that a different support system for the bands would be necessary if I wanted to transfer my creation from my imagination to the dodgeball court.

After a trial run with the rubber bands, a sign post and a weight tree proved my idea could actually work, I quickly planned out a new contraption that I thought had an outside chance of working. I called up my buddy Robert to ask if he would help me construct my masterpiece, since my only experience with construction was the few times I watched Bob the Builder with my younger cousins. (OK, it was just me.)

He agreed to help and gave me a list of supplies that I would need to acquire. I hurriedly rounded up those necessary items and he arrived a few days later. Using a couple 4X4s, some 2X4s, a box of nails and a saw, we spent the next two hours assembling the creation in the shadow of my family’s carport. My original design, which I had anticipated would not work, did not fail to disappoint. Instead, Robert used his expert design skills to tweak and improve upon what I had initially envisioned.

After a hard day’s work, we both stared in awe at the masterpiece that stood before us. I was slightly scared because I knew something had to go wrong. I decided to test it out to see if I was just being paranoid. I excitedly jumped out in front of the machine, which I dubbed the “ROB 9000” in honor of Robert’s help, and awaited its maiden ball launch. There were butterflies in my stomach and I couldn’t keep my heart from pounding inside my chest.

Robert placed a dodgeball inside the pouch between the bands, pulled back and let it fly. Before I could even react, the ball had shot out like a rocket and planted itself firmly in my gut. I was ecstatic. Having the air driven from my lungs by the ROB 9000’s first launch sent tears of joy down my face. It had worked better than I ever could have imagined, and as I stood there gasping for breath, only one thought kept going through my mind:

“Wait until the guys get a load of this…”