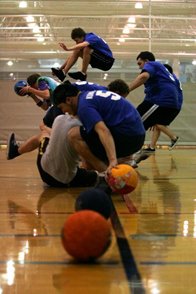 Most teams in the NCDA instantly recognize DePaul as the team who cares only about fun… and we wouldn’t have it any other way. The DePaul Dodgeball club was founded with the intention to allow students to cut loose from their stresses in life, whatever those may be. It initially attracted a wide variety of students from all different backgrounds, and this club diversity became a mainstay in the culture of the club.

Today, our club consists of everything from finance students to musicians and aspiring filmmakers to philosophy majors. Some of us our metalheads, some of us are hippies. There are girls, and there and guys, but we’re all dudes. Essentially, we come together despite our differences in lifestyle, career paths and interests because we all have on commonality; we love this freaking sport. You will never find a more cohesive group of people with more differences in personality, and that’s all because dodgeball has brought us together to hone our aggresive energy into something that makes us feel like kids again. We’re often referred to by lame, isolated DePaul students as “The Cult”, because of our ridiculous antics and overt hilarity. These are all huge reasons why we play the way that we do.

Instead of holding practices, we just play. Everyone is invited, and you’re numbered off into two games like it’s a pick-up game. Non-stop play for 2 hours, thats how we roll. And we have never forgotten the dodgeball, so in the spirit of gym classes all around the country, we attempt to be deviant and goofy as much as possible. Remember that time your gym teacher told you that you were being too aggresive and energetic during dodgeball play??? We burn that teacher in effigy at DePaul. We refuse to put a cap or filter on the fun we have… and this is the exact reason for the phenomenon of “Baby Shark”, trick shots like “The Awesome” and “The Shotgun” and our contradictory moniker “undefeated”. We will never be defeated because we will always have fun. Plain and simple.

Come join us on Monday and Thursday nights and experience the DePaul mantra for yourself. I promise, you’ll never wanna go back to running wind sprints or practicing strategy in your practices again ;-).