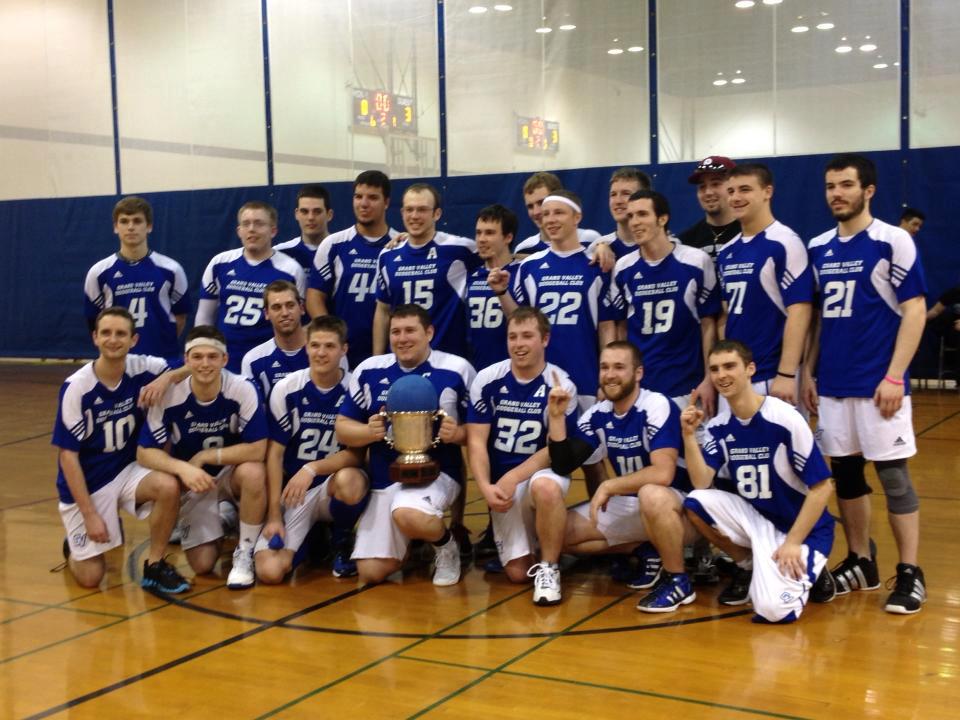 Your 2013 National Champions, the Grand Valley State Lakers, went 16-2 on the season.

Led by Mark Trippiedi (GVSU #8-C) in his second year as Head Captain, the Lakers were able to start the season off at the Bowling Green Invite in October and go 3-0. They picked up wins over CMU (7-1), BGSU (5-0), and SVSU (4-1). Their next match was at Saginaw Valley, where they lost their only game of the regular season 2-1 to the Cardinals. They next drew the Spartans of Michigan State at home, and played what could possibly be the game of the season. With a huge 3-2 OT win against the Spartans in which they came back from 2-1 down, the Lakers made a big example to the rest of the league that the were still the team to beat in the NCDA.

In the second semester GV went to the Chicago Dodgeball Open and faced JMU, Nebraska, and DePaul. Grand Valley came back from 1-0 down against JMU in a prequel to their Nationals duels, winning 3-1. The Lakers had no problem with the Huskers or the Demons, gaining a crucial six points over the weekend. The biggest regular season tournament of the season loomed next, the 2013 Michigan Dodgeball Cup, and the Lakers were ready. They took down SVSU in a revenge battle, this time in OT, and then handled the Chippewas and Spartans to win the MDC for the first time in two years. This put GVSU at 10-1 on the season, and was the end of the regular season for them.

GVSU was put into a pool with JMU, Miami, and NSULA at Nationals 2013. GVSU would dominate NSULA 7-0 in their first game, but would be shut down as JMU ran 19 minutes of time off the clock in the second half to preserve a 2-1 win. GVSU bounced back with a win over Miami, and gained the sixth seed in the Sunday Bracket. They crushed BGSU their first game to earn a rematch with JMU, and this time they came out firing, beating the Dukes 4-1. They next played host school UK, and once again they destroyed a good team, getting a 4-1 win. The win over Kentucky put them back in the championship game, this time playing MSU, a team they’d never lost to. Their talent really showed in the title game, as the Lakers manhandled the Spartans to win their fifth title in the nine year history of the NCDA.