National Tournament Finish: Lost to SVSU in the first round

Overview: Fun fact number one: Penn State has been to as many regular season tournaments as they have Nationals (2). Fun fact number two: The Nittany Lions have taken a point from Grand Valley before their East Coast counterparts UMD and Towson could.

Penn State has become the team in the league that a lot of people want to see more of, but it just hasn’t happened. The boys from Pennsylvania have only come to a few tournaments, but show talent and skill every time they play. The problem for this team is that without the experience they could have gotten, they are only capable of small flashes of greatness. If this team could make it to more tournaments, I have no doubt that they would already be a solid force in the east.

Head Captain William Deutsch is hoping his team can make more appearances throughout the year, even though he himself is only available for Nationals in April. “The biggest motivation for us moving forward was losing only 2-1 to GVSU,” said Deutsch. He and his teammates will be looking to use that match, as well as getting their first Nationals win, to change the mindset of their players to really buy in this season.

Justin Lin headlines the early roster for the team, but unfortunately won’t be around for the spring semester. Penn State only lose two other players in the spring as well, returning nearly everyone else for the full year. This team has a lot of upside, they just have to act on it.

The team has had trouble in the past garnering enough interest from its members to leave campus on Saturdays in the fall when there is a football game going on. It hasn’t mattered whether it is home or away because as many know, Penn State loves their football.

Assuming there’s a change of course and the players can get away for more weekends, Penn State has a real chance to pull off a few upsets this season. If they don’t, then we’ll see the same flashes of greatness when they do come to tournaments; we won’t see anything consistent though. 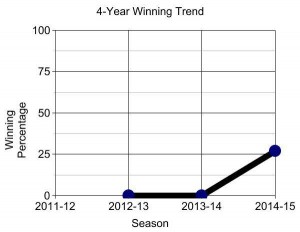