National Tournament Finish: Lost to UWP in the First Round

Overview: Where do I start with this bunch? A lot of members in the league had low expectations for this team last season due to the high turnover rate they had from some of the best players on their squad. However, I have learned to never count the Golden Flashes out, for they always find a way to stay competitive and do a fantastic job of developing their younger players throughout the season.

Kent State’s biggest Achilles heel last season was their inability to bring their “best squad” to any tournament either than Nationals. They had at least 5 to 7 players starting for them at Nationals that I hadn’t seen since the previous Nationals!! A positive side of this is that when they did attend tournaments, the players they did bring played well and got substantial experience that they can bring back this season as far better contributors to the team then they were a year before.

Kent State is very fortunate to bring back an All-American for their squad this season and that is their very own Albert DePerro, who is returning for another season but not as their captain. They will rely on him more for his athletic ability than his leadership skills this season.

Another player the Golden Flashes will be relying on heavily this season other than their captains is Evan Less. This young man impressed me incredibly last season with the way he played and how well he knows the game. If Evan is able to play at the high level he is capable of playing at, he will without a doubt help the Golden Flashes win a few close games they would otherwise lose without him.

All in all, the expectations for this squad have always been either very high, or very low. This season most people would probably expect them to finish around the middle of the pack, I however expect them to finish in the top 4. Yes, that is a very bold prediction, but I was very impressed with how this team played against my squad at Nationals and with 17 returning starters, I expect nothing less than a final four appearance for this up and coming squad. 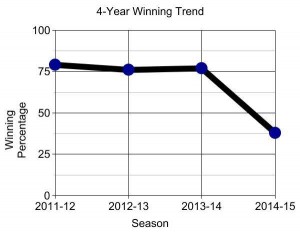