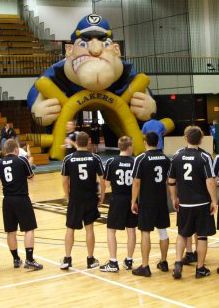 Before April 4, 2009, the concept of Dodgeball Nationals was very foreign to me.

Don’t get me wrong, I had ideas of what the year’s final tournament would be like from listening to some of the older guys talk about it.

But without seeing it firsthand, the notions I held regarding Nationals were very similar to what I thought college would be like while I was still in high school.

People would preach to me about how awesome college was and I would hear dudes older than me reliving their favorite college stories like they were straight from a blockbuster comedy.

Needless to say, my emotions during the eight hour drive up to Grand Rapids were a mixture of nerves and giddy excitement. I felt like a kid on Christmas Eve before he finds out Santa Claus isn’t real. (My parents dropped that bombshell on me last year, much to my dismay.) As I tried to fall asleep on the Styrofoam hotel mattress Friday night, I had a million unanswered questions running through my head.

How would my team fare? What would the captains’ meeting by like? Was GVSU still as dominate as when they whipped us 15-0 our first season? Did anyone actually listen to our podcast?

Walking into that gym the first day was like walking into Disney World for the first time. There was so much I wanted to do.

The setup was fantastic.

Using GVSU’s basketball court as the main stage for competition was ridiculously cool. I mean, how many teams can say they play every game on their basketball team’s court? I could feel the excitement humming through my guys like electricity. They all sensed it.

We’re finally here. After months of anticipation, we’re about to play in the most legitimate tournament we’ll probably ever play in.

Some quick stretching and reuniting with familiar faces helped me shake some of the nerves. It wasn’t like I was seriously worried about the teams we were going to play or how well we’d do. I was just incredibly excited to be at the national tournament and anxious to get started.

Before I knew it, we were being whisked away to the bowels of the Fieldhouse for my first ever captains’ meeting. When we all settled into the chairs lining that lecture hall, you would’ve been hard pressed to find a more dedicated group of guys on the planet at that moment. After some last-minute scrambling, we finally configured the schedules for the first day. My team would play Central Michigan, GVSU JV and Wisconsin-Platteville.

During that first game against CMU, I could’ve griped about how we were drained from the eight hour car ride or just had first half jitters. The simple fact was that we underestimated CMU. That’s one of the beauties of Nationals. It brings together teams that you haven’t played or never even seen play before.

Despite turning a 0-4 deficit into a heartbreaking 3-4 loss, our game against CMU did yield one of the weekend’s funniest moments. It came during the first point. I never even saw it, but apparently a rocket throw from CMU made a detour to crush my buddy Adam Martin in his face as he stood up from grabbing a ball. This was hilarious for several reasons. If you check the pictures from Nationals, you can see the elaborate face paint and hairdo that #99 trotted out for the first day. Knowing that we’d be seeing black face paint on some of the balls was an amusing reminder of how many times Martin stopped throws with his face.

But nothing could’ve topped Martin’s face when he approached me before the start of the second point. In fact, I’m laughing about the thought of it as I write this sentence. The sight of Martin with his eyes swollen shut and a mixture of sweat, tears and snot running down his face was absolutely priceless. Even more classic was him telling me, “I’m fine! I can still play.”

Also on my personal highlight reel was getting hit in not one, but BOTH, buttcheeks by some rocket throws during the GVSU JV game. Like Ron Burgundy said, “I’m not even mad. That’s amazing.” Our team definitely had the best pre-point ritual when we imitated the Globo Gym Purple Cobras against DePaul.

I believe Jack Attack said he was “rolfcoptering” on the floor after that one. Finally, we perfected the game of “Gladiator” against SVSU. Watching our guys battle it out against the Cardinal juggernaut might’ve been my proudest moment of the weekend.

When it was all said and done, we didn’t finish as well as I’d hope. But here’s the way I look at it, thanks to an attitude rearrangement from DePaul’s guys: ten years from now, I won’t remember the record we finished with or the points we should’ve won.

I’ll remember all the awesome dudes we met and the feeling of being around so many people that love the great game of dodgeball. And how much my cheeks hurt after that GVSU game, of course.