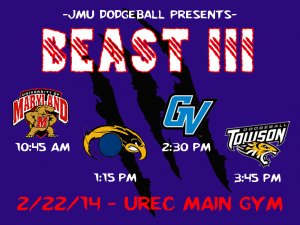 James Madison Dodgeball hosted the BEAST III tournament a few weeks ago. The results from this event are as follows:

While there were many great games played at this tournament, recapping those matches is not my reason for writing this article.  Being a member of the Grand Valley Dodgeball Club, the vast majority of my dodgeball career has been spent competing against teams from the Midwest (mostly Michigan teams).  Playing in a tournament on the East Coast was a new and exciting experience for me; in a way it restored my faith in college dodgeball.  Here’s why:

As many of you may already know, the “Michigan Region” has historically been the most dominant region in the NCDA.  If you aren’t a Michigan dodgeballer than you might not be aware of this, but we tend to view our annual “Michigan Dodgeball Cup” as a preview of Nationals.  It’s not that we don’t expect a non-Michigan team to make a run at the national tournament, we are just a bit partial to our region.

I admit I have been one of these biased individuals.  In the past I would expect the national champion to be determined simply by the “Michigan Region” team that plays the best on day-2 of Nationals.  Was it fair for me to have that mindset?  No, but for the past 7 seasons, the best Michigan team has brought home the hardware.

Going into the BEAST III, I was excited to see East Coast teams such as Towson and Maryland in action for the first time (other than in YouTube videos).  I wasn’t quite sure what to expect.  I just figured they wouldn’t come close to the talent that we faced a week earlier at the Michigan Dodgeball Cup.  As it turns out, I was pleasantly surprised with both teams.

Towson didn’t have their best performance, going 1-3 on the day, while Maryland finished at 2-3.  But the top-end talent on both of these squads was encouraging.  Towson was not able to bring their full roster, but the players I saw that were their varsity “regulars” impressed me quite a bit.  Their captain Jon Shaw, in my opinion, is one of the more talented players in the league.  A lot of hype surrounded Joe Tobin for his strong throw, and I’ll admit he was as advertised.  If Towson can get their full roster healthy and available to play, they could be a sleeper team to make some noise at Nationals.

I had the opportunity to watch the Maryland vs. James Madison game early in the day.  I expected this would be no contest since JMU was one of the top ranked teams in the NCDA, but UMD held their own.  JMU earned a 4-0 victory, but I was more than impressed with the way Maryland played as a team that game.  After watching that performance I wouldn’t be surprised if they end up pulling off an upset at Nationals (something I never would have expected from an “average” East Coast team in the past).

For a tournament where GVSU was the only Michigan team in attendance, BEAST III was a huge success.  After all, four of the top five ranked teams were at this event.  Kent State and James Madison are two teams that are more than capable of winning it all this season.  The game between Kent and JMU was actually the most exciting game of the day with Kent winning in overtime.  The crowd for that game was as loud as any crowd I’ve witnessed all season.

Basically it comes down to this: I’m more than excited with the direction that college dodgeball is headed for the East Coast.  Each East Coast team had no trouble bringing a full 20-man roster, which shows that they have good sized clubs.  JMU did a great job hosting this event, and making sure their large fan-base attended the games.  There was so much excitement in the building when the home team was playing, I was happy to see that type of enthusiasm for the sport of dodgeball.

Sure, I still believe that the “Michigan Region” is the toughest in the NCDA, but there is quality dodgeball being played all throughout this league, not just in Michigan.  The Beast III tournament held at James Madison was proof of that.  I’m willing to bet there has never been as much talent throughout the NCDA as what we are seeing this year.  So much competitive dodgeball was played at the BEAST III, it made the 12 hour trip from Allendale, Michigan to Harrisonburg, Virginia well worth it.  I am very optimistic when it comes to the future development of the NCDA, especially for the teams from the East Coast.

One thought on “My Reaction to BEAST III”