Almost two years ago, President Felix Perrone wrote an article called My Dodgeball Story: Felix Perrone and inspired many to tell their story. I encourage all of you reading this to give it a read, barring that you are taking the time to read this alone. On a more contradictory note, many failed to write their stories, which is why I am writing this now. There are far to many NCDA alumni with amazing stories to tell of their time not only in the National Collegiate Dodgeball Association, but in their experiences off the court, and their time in other leagues outside of the college level. With the off-season bringing little to write about, Kevin Bailey and myself thought it’d be a great idea to share some amazing stories with the Dodgeball community. The goal is to release 3-4 stories a month until the season starts back up in August/September. If any of you are interested in telling your story please either contact us through Facebook, or email us at Ncdadodgeball@gmail.com.

To re-continue this saga, I could not think of a better person than Kent State’s very own Leslie Ellison. Starting her playing career at Kent State in 2008, Leslie played all 4 years until 2012. She is well known as an individual who does not cater to nonsense, but loves a good laugh, and enjoys a good challenge on/off the court. Leslie still plays to this day, and is a reckoning force for the encouragement of women to play dodgeball in the NCDA and beyond.

“The Floor” is yours Leslie:

Take a second and think back with me about what you were doing ten years ago…Were you:

A decade ago in 2008 I was a freshman at Kent State University. I was absolutely terrified. I was a young woman that knew she wanted to get into science, and that was about it. I had no idea that the first week of being on campus I would be introduced to a sport I wasn’t privy to in grade school. At Kent for a very long time I was the only woman. In the NCDA I was one of the few women that decided, “Well, what the hell. This is neat.”

Dodgeball in college for a woman includes years of dealing with over-whelming self-doubt. Countless hours poured into practices, out-of-college leagues, and out of town tournaments just trying to prove to the dominant gender that you belong there. That you are good enough; that you have court awareness; that you can time your throws; that you can block anything that came at you; that you can catch everything. That you belong just as much as they do, even if in most cases you don’t have enough muscle – both literal and figurative – to prove it.

A lot has changed in dodgeball for women since 2008. A lot hasn’t.

Having come through the dodgeball scene in the NCDA, I got a jarring crash course in how competitive athletics could be pretty toxic. I spent the previous ten years in women’s softball and subsequently felt like a fish out of water. It wasn’t pretty to deal with, but it also wasn’t alright to speak up about it being a minority of 1 against 14 to 19 if not more. No one wants to get benched because they spoke up. We just want to play, right? That’s all this is about, playing dodgeball right?

Except if some women hung around too much they had the potential to be deemed ‘team bicycles’ [I heard this utilized many times at different after hours dodgeball parties, about other women]. Women risked being viewed as easily accessible without realizing they were opening themselves up to a world no one should be exposed to. Some would be called “Dodgestitutes”, which resulted in an NCDA-related twitter account that had an article written about it circa April 2014 by Ziggy to call out bad sportsmanship from athletes women were trying to share a space with. But many of us women dodgeballer’s brushed it off so we could be taken seriously and to get better at the sport; because that’s what we were here for and cared about: The sport of dodgeball. 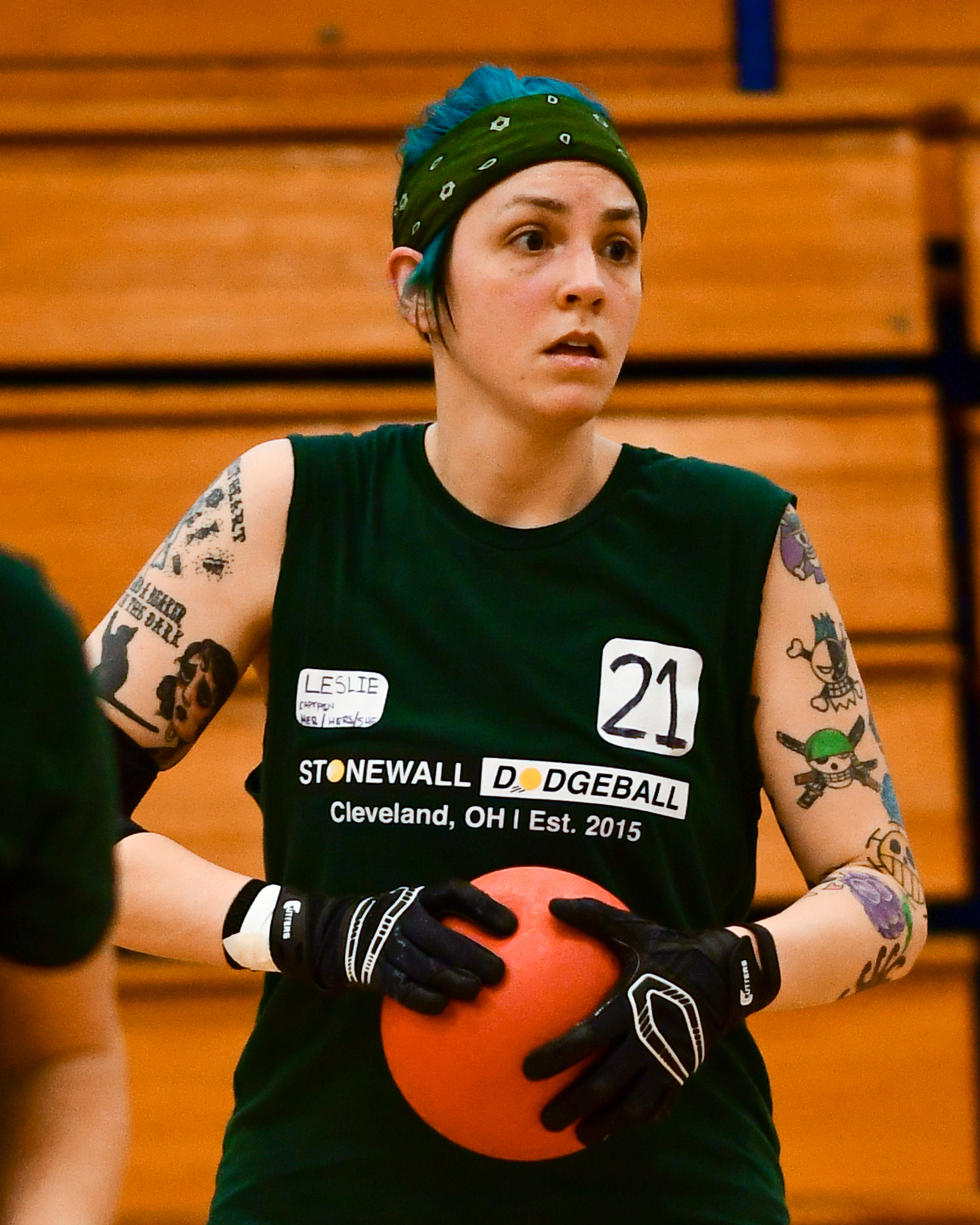 Women’s matches started happening around 2011/2012 in the NCDA (although it was and from what I hear is still difficult to get people to take it as seriously as it should be taken – but I digress). Kent’s ladies eventually grew with the addition of a few new faces during my last few years before I graduated. After I graduated I was elated to find out that female players were both founding and leading NCDA teams. (I’m still kicking myself that I didn’t blow up the Facebook feed of my Alma mater’s female captain with a dozen Leslie Knope gifs and instead opted for a more solemn DM).

The change in the NCDA culture and in dodgeball generally makes the nonsense that went with being an early woman in dodgeball worth it. Working through the good days when you manage to catch half a dozen pinched 8.5’s whipped at you by cannons (wearing the bruises with pride no less), as well as the bad days where nothing you can do keeps a ball from bouncing at just the right angle off of your body so you can’t catch the damn thing, good and bad, it was all worth it. Trying to uplift other women of dodgeball in a very male dominated sport can be exhausting, but more often than not it’s been incredibly worthwhile. There has always been an issue of retaining women in dodgeball for a multitude of reasons (career change, life changes, out of town or out of state moves, etc). However, there has been a steady increase in retention that I like to think is due to older, more seasoned court veterans giving the fresh young women of tomorrow someone to look up to both as an icon and for guidance. Representation matters, kids. 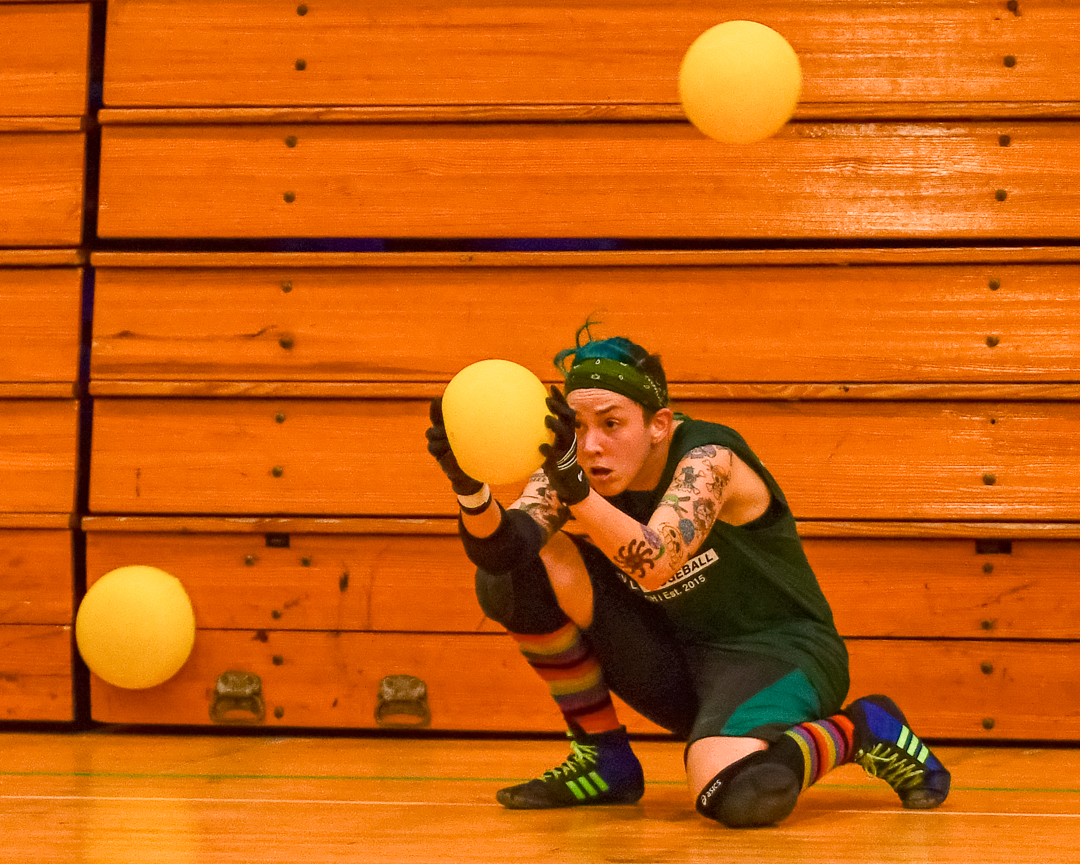 My years spent playing in various other leagues, each with their own unique experiences and pitfalls have helped bring the role of experience into clearer perspective. I have become that older, seasoned woman of dodgeball that I would have loved to have had when I was younger to look up to; to ask questions; to get game advice from; to help improve my game. I have tried to be that woman in my other leagues post NCDA. A Friday night foam league has a young woman that has recognized her capability and transformed her story from “It’s my first time playing and I don’t play sports too much but my husband is on the team and you needed another woman and I’m not as good as you and…” to pushing up on the court with a ball to pump fake and catch or throw just as much as anyone else on our team; she just needed to have confidence in herself, and a good figure to help bring that out in her. I have expanded not just from singular cases on my own team but to league wide outreach ensuring that women in dodgeball are getting the outreach they need to light the fire I have for the sport. A Sunday no-sting/no-pinch social league provided that opportunity. I helped organize a women’s clinic during the league’s rules clinic day and got space during open gyms to have women vs women exhibition matches. I heard captains rave for weeks how the women on their teams loved the confidence boost that both experiences instilled in them.

Many of those women came to me afterwards and thanked me for being an inspiration as well as had questions for how to get more involved with dodgeball. The fires have been lit and it’s translated to a women dominated team participating in a sister-city tournament last month for that league. I couldn’t have been prouder or happier at women in dodgeball coming together to do something great: support and uplift each other because we deserve to be on the court too.

As more women get involved in the world of dodgeball, there has been a spread of women’s tournaments across the country. They turn the court into an arena in which women of dodgeball that traditionally take a more supportive/defensive role on their co-ed team, instead let their fierce flag to fly as they get aggressive on the court with their throws and plays. It hasn’t always been nice and easy to be a woman in dodgeball – hell, it still isn’t always nice and easy – but the fact that dodgeball as a community at large has grown to the point that we have a ladies’ scene, complete with women’s tournaments and all-ladies teams that are taken seriously, is a real joy to behold as a seasoned woman of dodgeball that remembers how lonely it used to be. Women of Dodgeball, keep balling hard. We must do our best to encourage and uplift other Women Dodgeballers, because some day we will hang up our gym shoes, put away our kneepads, and discard our athletic tape as a new generation of Women Dodgeballers that need to be equipped to take over at the center court line, ready for the barrage of balls. We must stick up for each other both on and off the court, because at the end of the day we might only have each other to rely on to block the cross court shots for us.