Continuing the My Dodgeball Story for our 3rd story of the summer, and 1st of July comes from Kent State University’s very own Jason Hallman, who played at Kent State from 2009-12, is in his 1st season with the Cleveland Has-Beens, and is a prominent referee in the NCDA. Take it away Jason…

I was recruited in a very unlikely manner for Kent State Dodgeball in 2010. I was at a Magic the Gathering club meeting and the current club president came over after not even knowing my name on the second day. He then said in a complete straight face, “You look like a big guy that could hurt someone from throwing a ball at them. Come play Dodgeball tomorrow.” Needless to say I became the big target for Kent’s team.

The first tournament I attended that year was Nationals down in WKU after never playing in a match before. I was the last minute fill in and we went down there with 13 strong and the first match I remember was against the titan of a team called Grand Valley State. In one of the games I was stranded as the last man standing and figured to go out in retaliation was better than a firing squad. I loaded up with 4 balls and charged one of their captains. He laughed and just ducked down behind his ball to get ready for me to throw. I then launched all 4 of the balls in quick snap succession and pelted him 3 times after he cleared the 1st block and didn’t think anything else was coming. His face was filled with pure astonishment and bewilderment, till he started laughing as I got drilled by his other 4 players at point blank range. From here I got my first nickname at Kent, “Machine Gun.” 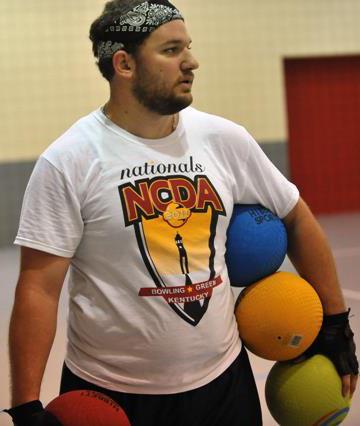 Past this time, anyone that played with me knows that I transitioned to a much more upfront and annoying roll of full time meat shield for Kent’s team. Back when Dirty Blocking was a thing (ball was dead once it came in contact with blocker’s ball), I frustrated many teams, and earned quite a few other “nicknames” from them. You will never know how much of an impact you can make for your team until you get another team to throw all 10 balls at you on a balls over just to make sure you’re out. Thank you Kentucky.

I was never involved with any leadership position or important role at Kent, but looking back on it; it would have been something I would have liked to have done. Regardless, I still have to give my appreciation to all the captains of the league for helping to manage the teams and keep this great sport going.

After graduating I decided to continue to assist the NCDA as a Ref and have not regretted it yet. From seeing others that don’t care to seeing “paid” non dodgeball refs try to ref the sport was just infuriating when I was in college. That was something I sincerely wanted to change if I could and as a ref I am trying to. I feel the league as a whole now with the active alumni and the board have made great steps in trying to give the players the best experience in the game that they can get when they are playing. I would highly advise any current player to consider assisting your team a bit and helping the next generation grow and learn once you graduate if possible. My hope is to eventually, when I’m an old fossil, to be able to turn on the NCDA National Championship on some prime time sports slot.

From here I only have two pieces of advice for the players: Dodgeball isn’t just a game, you will get experience, friends and much more from the sport. Embrace what you get and use it. Interviews, Connections, Travel; anything at all no matter how it feels it is a useful experience in your life. Second, you can see and feel the great things you are capable of on the court, transition that to off the court and always strive for your best.