Well the best non-Nationals tournament of the year took place last Sunday. Although the Michigan Dodgeball Cup may have lacked some drama regarding which team would lift the cup, it was not short on some dramatic moments on the day. With the 2017 MDC in the books, there remains only one thing to do: start looking ahead to the 2018 MDC! 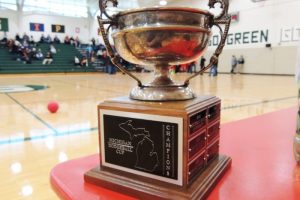 The defending champions in GVSU will look for the 4th(!) consecutive MDC championship. Everyone knows by this point that Grand Valley doesn’t rebuild, they reload. Coach Dylan Fettig might as well be called Nick Saban at this point the way he constantly recruits top players and keeps the Lakers at the top of the NCDA year after year. Someone may want to look into the program to check for recruiting violations. I’ve heard he’s been know to utilize bag men to get the top high school dodgeball players to commit to GVSU. Could be a scandal in the making. Regardless, the top players will once again be back for Grand Valley. Although some well known names may end their careers before the 2018 MDC rolls around, I’m sure new young Lakers will rise up and fill the gaps. In all likelihood Grand Valley will enter the tournament as the heavy favorites once again with only losses (if any) to other Michigan schools. Expect GVSU to once again lift the Michigan Dodgeball Cup come February 2018.

Here’s a prediction. Saginaw Valley will play very few tournaments prior to the 2018 MDC. They will look lackluster in said tournaments. Critics and supposed smart people will predict them to have a poor MDC performance. They will beat CMU and MSU at the 2018 MDC, once again proving their haters wrong. SVSU will once again be in competition to lift the MDC in 2018. Feel free to get all your 2017-18 SVSU trash talk in now, because by the time the 2018 MDC rolls around, they will make you eat your words. Even with wins over Central and Michigan State, the nemesis of SVSU seems to always be their valley rivals in GVSU and a loss to the Lakers will once again elude them of the 2018 MDC championship.

CMU will come into the 2018 MDC full of potential and looking to take home the title for the first time since 2010. If it wasn’t for MSU, Central Michigan would certainly be the historic under-performing team at the MDC. The only hope for CMU to win the MDC next season is if Jacob Leski is on the sidelines screaming motivational statements at them for the duration of all three of their games. A big question mark will be how many of the veteran Chippewa players will return in 2018. You’re never quite sure in the NCDA when players will retire for good and say enough is enough (cough…the author of this article…cough). So a heavy return of the CMU squad would make them once again one of the best teams in the league, despite people complaining about their ranking within the Gonzalez system.

MSU will lose a lot of talent at years end. But even if those players remained it might be hard to turn around the annual tradition of poor performances at the MDC. But, perhaps it is ridding themselves of the likes of Colin O’Brien, Alex Zajac, and Wes Peters to allow the Spartans to put forth a good performance at their home tournament. The young MSU squad will look to exorcise their MDC demons. Unfortunately for Michigan State, the most likely scenario is once again a fourth place finish at the MDC.

3 thoughts on “Looking Ahead: Previewing the 2018 MDC”