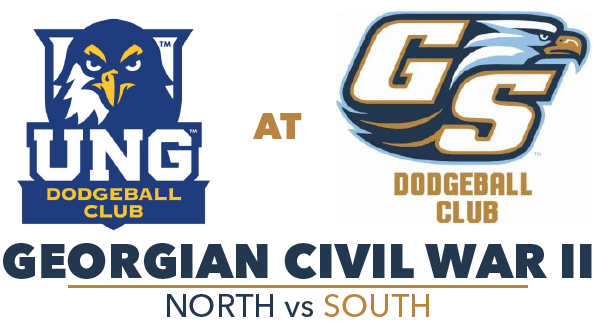 North and South are back at it again. Our two college teams in Georgia are meeting for another Civil War double header in Statesboro. In case you were wondering, North Georgia has the Nighthawk and Georgia Southern the Eagle.

The first Georgian Civil War was an induction match for both teams (#42 and #43), with UNG coming out with both wins.

North Georgia starts off with a 37.119, and Georgia Southern starts off with a 37.489 and is given a +1 for home court advantage. That gives GSU the small favor here, but the matches are far from predictive with such a shallow Rating Gap (1.370). Because we have only two matches, we can talk about all the possibilities.

Post: GSU 39.042 – UNG 35.565
This is what would fall if GSU wins out, as the Gonzalez system predicts. However, when Rating Gaps are small, predictability lowers. We could see technical upsets occur more frequently. Because the teams are fairly even, we see that both matches have a decent chunk at stake. At their point among the other ratings, any result will bump teams a few ranking slots.

Post: UNG 39.165 – GSU 35.442
If UNG claims the double header, they’ll gain one upset win but be predicted to win the next match; the system adjusts after each match. This is the best case scenario for UNG, obviously two wins giving them the most in rating exchanges.

There are often intangibles we don’t see when we view the numbers. UNG was able to field a team and participate at Nationals 2017, while GSU was only able to send a handful of players as representation. We were glad to have GSU help as staff, but North Georgia certainly more on-court experience that will be valuable in any future match.

Post: UNG 37.565 – GSU 37.042
Here we have Georgia Southern winning the first match as predicted, but the home team falls to their Northern competitors in the second. All of these potential upsets aren’t particularly surprising outcomes when evaluated statistically, but upset matches are always worth more points to the winner. They are certainly worth more than ordinary, predictable results, and often it’s a reward for weaker teams in a region to upset their stronger neighbors.

There’s even more possibilities here. Either match has the possibility of going into Overtime, and while I still haven’t found a solid way to predict that, we at least know that the final exchange will be halved for any OT.

Double headers are slightly rare across the records, being more common in the stone age records because there were less teams. The norm now is to host multi-team events. But we’ve seen some cool things. In last year’s Opening Double Header at WKU, Western won the first match in Overtime but fell to UK in the second. UK went on to host and win a double header against Miami in October. That was also the same day of the Battle of the Valleys, followed by the Georgian Civil War the following week. After the winter break we saw a double header in an similar play of the Opening Double header. MSU took an OT on GVSU, but dropped the next game. And then there was a UWP/DePaul double header in the Chicago Dodgeball Combine.

Ok, so last season there were six double headers. But I swear it is rarer before that. There were also nearly 300 matches played by 32 teams last season.

The most historic double header is the Battle of the Valleys, which has been held since Saginaw Valley’s inducting match against Grand Valley, though it wasn’t always two matches. Sometimes it was just once, and many times it included a Battle of the JV Valleys. Here’s hoping we witness the beginnings of that tradition with the Georgian Civil War.