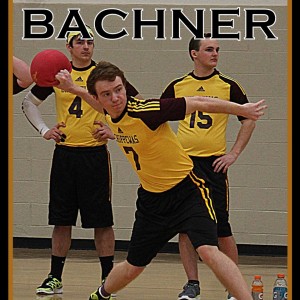 First, the content team would like to apologize for the lack of Baller of the Month coverage. We promise to keep a more updated BOTM in the second half of the season.

But as for November’s BOTM, the Co-Captain of Central Michigan, Zach Bachner, has earned the honor. I said in the most recent Average Joe’s podcast that I believe Zach has been the most improved player in the NCDA this season. That is not to say he was not a good player last season. But I do mean to say that Zach has made the jump from good to great. Going from Assistant Captain to Co-Captain, Bachner also bears a much greater leadership role for the 2nd ranked Chippewas. Under his great play and leadership, CMU has won 10 of 11 after dropping their first game of the season. Zach is a major reason why CMU is one of the best teams in the NCDA again this season. I had the opportunity to talk to Zach about himself and his team thus far this season.

Colin O’Brien: First off, congrats for being named Baller of the Month. You in particular I feel have made a leap in your play from last season. What do you think has led to your improved success as a player this season?

Zach Bachner: After being elected captain I knew there were those, both alumni and current players, who doubted my ability to effectively lead our team so I personally made it my mission to prove the haters wrong.

COB: Nice, I like the mindset. You guys made it to the national championship game but were unable to bring home the title last year. Obviously you have the goal to win it this season. What have you done as a player and as a captain to get your team to finish this season with a championship?

ZB: I believe our team’s success so far is due to the fact that the majority us have been playing together for over two years now which has led to our team’s top tier level of communication on the court. Also, a faster pace at practice has allowed us to get far more work in during our practice times.

COB: What are your favorite teams to play against and what team do you really want to play this season that you have not played already?

ZB: I really enjoy playing MSU and GV since the competition is always so fierce. I’ve only heard positive things about Ohio State so far this year and I want to see firsthand if they have what it takes to compete with the Michigan region.

COB: All quality opponents there. The past seasons when we would play GVSU and the outcome of the game was decided I would always go up and try to hit Trevor Nordberg to test my arm. Do you have any players who you like to go after and hit or can’t wait for them to throw at you and go for the catch?

ZB: You probably could’ve guessed this but anything that involves getting Wes out is always satisfying.

COB: Haha we definitely share the same sentiments at MSU practices. What was your favorite or most iconic moment of the season thus far?

ZB: The first point against GV in our last tournament. Being able to be the last one in on a 1 vs 1 situation was defining moment for me this season so far. Knowing that my teammates had faith in me was the sole reason I was able to clutch it out and win the point. That was the moment that I earned the C on my chest.

COB: That was definitely an exciting moment to watch or in my case ref. Do you have any last comments or perhaps a bold prediction for next semester?

ZB: I’d like to give a huge shoutout to Shane (Willette). He’s the best Co-Captain I could have asked for and his support has given me the courage to push myself so extensively this season.

As it goes for next semester, I only anticipate even more intensity among the league. The fall was the most exciting semester I’ve played so far and I only expect the spring to be even more thrilling.