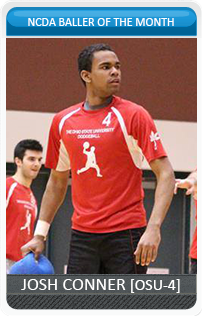 The new president for OSU was nominated by the Content Team for this August’s Baller of the Month. In our interview, we talk about club retention, tradition, and advice for new officers! Check it out.

Zigmas Maloni: Hey Josh! As OSU’s new Captain, what have you been up to since OSU Dodgeball hosted Nationals?

Josh Conner: Since hosting Nationals in April I have tried to keep myself busy moving forward to the 2014-2015 season. As the record shows, our tournament play fell far shorter than what we wanted especially being in front of our own fans. Needless to say, there was no time to hang heads. Knowing that I would be the captain for the upcoming year, I used the time after Nationals to improve as a player and a leader. I went to Chicago for the May Day Dodgeball Rally at DePaul, traveled to Kent twice for their summer Dodgeball tournaments, and kept in contact with the team over summer to keep everyone fired up for the new season. Getting back to school now, it’s clear to me that the returning players are all on board to use last year as a stepping stone to get where we want to be this season.

ZM: There was some talk about the low numbers in the Club before Nationals last year. What’s the plan to boost for this upcoming Season?

JC: The plan for boosting this year is the same as always; Getting kids involved with the team early by showing them why the NCDA is not typical gym class Dodgeball. This past week our club was represented at Ohio State’s annual Involvement Fair where we explained to hundreds of guys and girls the excitement and dedication of being on a team like ours. In the practices since, we have seen our numbers increase dramatically. We are consistently offering words of encouragement to new players who come to play competitively and aggressively. We have always believed in accepting any new participants who show interest and coaching them into players who can wear the jersey on the road.

ZM: The OSU Dodgeball Syndicate has a small tradition I noticed last year: the team pelting their defenseless President with a volley of dodgeballs. How did that get started? Any plans for your ceremony at the end of this season?

JC: Yeah it’s a real “nice” going away present for a person you’ve always wanted to do that to. Honestly I do not know who got that going, you might have to contact Ryan Carlton or Jude DuPart on that one. Hopefully the team will show me some mercy and put it off until next year since I’m a junior.

ZM: Well, even though your a Junior maybe you can still answer this: Since the club is the third oldest in the League, what are some are the older traditions that you enjoy, on either the OSU side or even League traditions?

JC: Well at OSU we have a tradition of celebrating a win with a team victory meal at Applebees. One reason is because Applebees all over the Midwest, and secondly because we for some reason, have not been convinced that their food is dreadful yet. Overall it always turns out to be a great bonding experience filled with laughs and talk about close shots or Sports Center catches that were made earlier that day. Waiting twenty minuets to reserve a 15-20 person table and eating with the team are some of the moments I know that I will nostalgically look back upon after my time here.

In terms of the league, my favorite tradition would probably be the All-Star game played at Nationals which provides a time for players across the country to set their differences aside and perform as teammates. In addition to the entire weekend spent at Nationals, this game is a way for the League to become more closely knit.

ZM: Any last advice for any new dodgeballers that might be coming into an Officer position this year?

JC: First and foremost you have to like the game. A team officer needs to be someone that can willingly devote noteworthy time to his or her team on and off the court. That’s not easy when you view weekly practice or scheduling tournaments as a nuisance. Secondly, the officer positions require someone that places the needs of the team over him or herself. There’s quite a bit of administrative work that officers have to set in order before even taking the court. It does take effort to manage finances and prerequisites that clubs must satisfy to maintain an active status. However, these endeavors make every moment of gameplay that much more thrilling. Whenever I take the court, I forget all of the daily stresses and hassles and give 120 minutes of enthusing and levelheaded Josh to the team. It’s thrilling to provide an energy level that gets players hyped and ready to throw full-steam even after arms begin to ache. Overall, I could not ask for a more amusing and competitive squad to play with and I encourage other officers to indulge themselves enough to feel the same. Most of the top teams in the NCDA (or any collegiate sport) boast a tradition of effective leaders. I invite other first year officers to be players that create a measurable improvement in their team’s achievements.