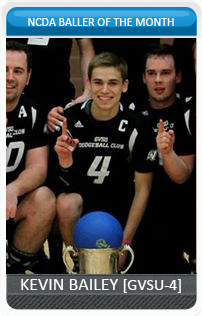 In regards to Baller of the Month, this player’s name has been floated around multiple times per season. There were many instances where he would have received the reward, but another player qualified just a bit more. Our selection process isn’t very scientific; it’s just a way to showcase a player or a team in the League.

But age old tradition from the Raymer days dictates that April BOTM be the Nationals MVP and National Champion Team Captain. For these reasons, and many more over the course of the season, I’m proud to interview fellow staff member Kevin Bailey… he’s certainly earned it more than once.

Zigmas Maloni: How does it feel to be ranked first on the 2014 All Nationals team and helping secure another Championship for Grand Valley?

Kevin Bailey: It is a great honor to be voted #1 on the All-NCDA team. I work hard as an individual player. Getting that type of recognition is awesome, especially considering how many great players there are in the league. More important than that individual success is the fact that I helped GVSU win our 2nd consecutive National Championship! As a team we put in so much effort over the past year to make sure we improve as a team, so it was a great feeling to finally accomplish our goal. The best feeling was just sending our seniors out on top. As the captain of our team, I was especially happy for the seniors because they have all done so much for our program. For them to go out with a championship is exactly what they deserved.

ZM: Take a look back at the Season and list a couple highlights you remember fondly. Gameplay or otherwise relating to any trips or events you played in.

KB: One of the highlights of the season was obviously winning the national title. Other than that, I would say my fondest memory from this year was our trip to James Madison for the BEAST III Tournament. We took a very depleted roster to that tournament, and as the captain of the team, I knew it would be a huge test for us. We had a very tough slate of matches that weekend, including games against JMU and Kent (both top 5 teams). This was a bit concerning considering we were missing some of our best players, and had to replace them with inexperienced freshmen.

Our mindset sort of flipped. We acted like we were the underdogs that weekend, and it worked. As it turns out, that was the best dodgeball we played all year by far! Our younger players gained a lot of confidence from that tournament. As a captain, there is no better feeling than when your team exceeds your expectations. That is exactly what happened at JMU’s tournament that weekend, and I think it gave us the type of momentum we needed to go on to win it all this year.

ZM: What are your plans for next year? Thinking about scheduling or still just basking in the past season?

KB: We are already excited for next season to start! I am working with our club president, Ben Newhouse to get our arena reserved for several dates during the fall semester. It is a goal of mine for GVSU to host more matches next year. It looks like we will be hosting a pretty big tournament in the fall, with some of the best teams in the NCDA, so I am excited about that. While it is great that we had a successful season, we can’t become complacent. We won 32 games this year. I’ll be disappointment if we don’t get more than that next season.

KB: I don’t have any specific plans as a content writer for the NCDA. I just know that when I was a young player in the league, nothing excited me more than reading an awesome tournament preview article by someone like Sam Hiller. As our league grows, I think that having content on the NCDA website will become more and more important. I just want to give back to the NCDA any way I can, hopefully my work as a content writer will have a positive impact on this league. It really is a privilege to be a part of the content team for the NCDA. I am so excited to see were this league goes in the future. As everyone who has been a part of college dodgeball knows, it is a special organization. I am more than excited for the future of the NCDA!