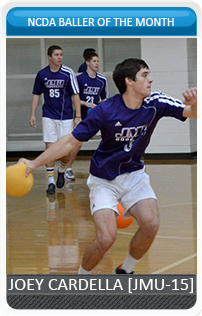 Joey has changed a lot as a player in his three years in the NCDA. Originally a player known just for his throwing ability, he has evolved his game to become a top level catcher in the league. Much like other past BOTMs, Cardella is usually overlooked by other teams because he plays with star players like Andrew Hassett, Ben Sizemore and Brent Gromer. Joey worked his way into the upper echelon of players starting at last year’s Nationals in Kentucky, where he caught seemingly everything thrown his way. While it is still a debate over who is JMU’s best overall player, Cardella has been making a great case for that title with the way he ended last season, and how he’s started this one.

With most of JMU’s roster still in tact from last year, it is definitely easier for Joey to up his game play due to the level of comfort he has with the team around him. Though he is not a captain, he help lead the Dukes by constantly staying on the front lines of the attack. Though it is apparent he really enjoys when other teams throw at him thinking that he isn’t paying attention, Cardella’s arm cannot be ignored. I have seen, and been victim of what happens when briefly ignoring Joey’s presence on the front line. It is easy to forget he has a ball and assume that he is there in hopes you make a mistake and throw at him. He knows when to take advantage of those situations and will nail anyone who ignores him with a high level of accuracy. It is very rare for Joey to get out on a single throw, usually taking at least two or three people team throwing on him to knock him out of a game.

Though Joey is still a relatively new name on the national scene, he is certainly looking to make a lot of noise this season. He has been an integral start to JMUs quick start this season, helping them to a 6-0 record. Even with the fast start, Cardella definitely knows that his team still has work to do not only in the regular season, but also at Nationals 2014.

SS: On a team full of athletes like JMU it can be pretty hard to stand out sometimes, what would you say makes you stand out as a member of your team?

JC: If you asked me this question during my freshman year I would have told you that it was my throwing ability. Going into my third year now, everyone of our member can throw about as hard as me and many throw much harder. I have had success in catching but in reality, there are countless teammates that do even better than I do. The one area I have claimed as my own is my dodging. Many have called me boneless. I suppose this would be my standout.

SS: Watching you guys play it seems that the people who most would consider the big names usually stay towards the back of your attack lines while you are up front, what makes you want to be on the front lines like that?

JC: I truly crave the action. I am the same way in practice. I want people to throw at me, I love convincing them that I’m not paying attention. Some might see it as a desperate attempt for attention.

SS: Since this is your third year in the league, as well as JMU’s, how do you think your development as a player will help you guys get past the quarterfinals this upcoming April at Nationals?

JC: I try to help set the pace for our team, another reason why I go up front even without a ball. I have been honing my catching the most of all as one of these results in a two player swing! Between making “soft” blocks, getting the other team to make low percentage throws and maintaing full court awareness, this can be JMU’s year. We want nothing more than to bring some gold to match our purple.

SS: Alright, and since you guys seem to have a lot of fun in you’re matches, I can only assume practices are like that too. Who’s you’re favorite teammate to get out in practice and why?

JC: Wow, that is a tough one. I love getting out Derek Pierce because he likes to give me his best shot every practice; he can deliver a fireball! Also Jeremy Butcher, love ya J-boo.

SS: Some people around the league my critique JMU’s undefeated record so far this season saying that you’ve been helped by only playing East Coast schools, what would you say to that?

JC: I would say that we are looking to travel out west very soon! You will all get your shots at us. Also, as for the other East Coast teams, there is a lot of talent over here. I expect a big future for Penn State who has copious amounts of talent. I can’t wait to see how some of the more centrally located teams do against the rest of the east!\

SS: Alright, and one question just for fun, I did this to Ben for your team’s season preview, celebrity crush then (childhood) and now?