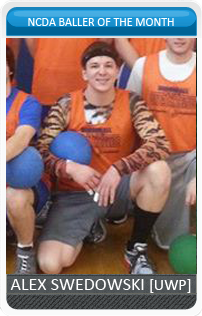 Alex Swedowski (UWP #3-C) led his team to a great performance at Nationals 2013, and was named ALL-NCDA Second Team by his peers for his performance. Alex was also an All-Star for the BLTs, and his Pioneer team was the breakout team at Nationals 2013.

SH: Wisconsin-Platteville was the breakout team at Nationals, and have a very positive outlook for the 2013-2014 season and you yourself made quite the name for yourself as a dynamic thrower and great leader. What’s next for the Pioneers?

AS: At our last meeting for the year we went beyond our basic routine of electing four members of the eBoard for the following year.We determined that we needed to implement tactics and the first ingredient to tactics is a group of on the court leaders. We have never had a “captain” on our team meaning it was always just an organized mess on the court. So for the upcoming season, expect us Pioneers to develop more strategy and nonverbal communication on the court. As team Captain next year I will implement a few ideas I have been thinking up. Hopefully this can eliminate that one costly mistake each game that seems to curse us!

SH: Going off of that, you guys had three losses at Nationals by a combined three points, and I believe you held the lead in all three games. What do you guys need to do to take the next step?

AS:We have done a poor time of clock management. By managing the clock more effectively we can prevent momentum from building up for our opposition. I believe we only used two timeouts in the games we played. In every game we scored the first point. Momentum should have been in our favor and we let that momentum switch away. Shot clock violations also hurt us quite significantly. If it has anything to do with time, one can expect to see an improvement this upcoming season! He who controls time controls the momentum. He who controls momentum controls the game.

SH: Will you guys be making more trips to play opponents this season? UWP has a history of playing only a few regular season games, but will we see you guys in other tournaments?

AS: It may be hard to determine that answer until we can see what becomes of our neighbor teams. St. Ambrose is a hope skip and jump away but being the “New Kids on the Block” they may have a tough time traveling. Western Illinois appears to have faded a little as well and it seems that Moody may be down some guys. I hope they all come back next year with a fresh case of dodgeball fever because we need all the local matches we can get. I have a good amount of influence on the team and I intend to use much of it to push that very idea. We only had one trip outside of Nationals last year and it was that trip that got our newer players so very excited. There is always a whole new type of adrenaline when you play people you don’t play against every day! That feeling of having people on the sidelines cheering on you with all their might! That’s what people love. And I believe with many first time players getting that experience last year that they will want a bigger taste of what our dodgeball community has to offer. Being realistic, I want to get three trips in for sure and I would love to get five! So I will do what I can on my behalf to make that happen! I know we’ve already discussed fundraiser ideas for the upcoming school year. So we have the components, we just have to get the gears in motion!

SH: What’s next for you personally? You were one of the big stars of the All-Star game if I had to say so myself, and being named All-NCDA Second Team must have been a big honor. But what do you see for yourself in the coming season?

AS: I want to expand on my awareness of the court. I need to be able to anticipate counter throws more effectively. Getting picked off by those counter throws is always a frustrating feeling and naturally I wondered why I wasn’t covered. But I changed a lot in the past year. Instead of trying to blame someone else for not covering me I see that as an area I need to expand and improve. With better awareness I can become more dangerous. I plan to finish my final season saying I gave it everything I could. Personally my biggest goal has been accomplished. “What goal was that” one may ask? Well, that was to build a solid relationship with players across the league. I love these players out here because they all share the same happiness off the court that I do! I took a trip out to DePaul for their May Day tournament after school was out for us and I went alone! I had an absolute blast and I felt like I had known everyone out there my entire life! To see a group of people one or two days a year and have a mutual connection with so many of them inspires me! So in terms of satisfaction, I’ve achieved every mental goal, now I just have to work on my my physical goals! And the first one is to change my post throw stance. I become too vulnerable after I throw. So expect me to have a slightly different look in technique next year! Also, by seeing people recognize me around the league brings a big smile to my face! I always strive to be remembered and outgoing! Literally, ANYONE can approach me and I will talk to them like we have known each other for some time. I feel that is one of my overall strengths in life (beyond dodgeball). To me, being recognized by players off the court is a more satisfying feeling than being recognized for a powerful arm! Being recognized for both is just a bonus.

AS: One last thing I want to add is among the lines of what do I see differently in the league than I did four years ago. Four years ago Platteville Dodgeball was a bunch of dorm buddies who played dodgeball out in the chained-in tennis courts with cheap rubber balls purchased from Wal-Mart. We had Spider-Man balls, Batman balls, even a Dora the Explorer ball. Nobody would grip throw. I remember hearing horror stories about Nationals from my teammates about guys from other schools throwing the ball 900 miles per hour between their legs while doing five backflips. Of course I am exaggerating a little bit but now we are one of those teams capable of competing with the best! I’ve established relationships with players from just about every team! Entering the league I was afraid of everyone in it….now I am honored to be a part of it! The organization I have seen in recent years has been a huge success! It is quite evident effort is put into the league by the people who help run it! Every time that I feel the next year cannot be any better it gets way better! I am excited where this league will be in five years…ten years! I hope to continue to be a part of it at that point. So this is a shout out to all you people who make dodgeball such a great game! The passion we all share and the desire we all demonstrate, it’s what unites us all as one big family! So thank you everyone for making dodgeball such a wonderful part of my life!