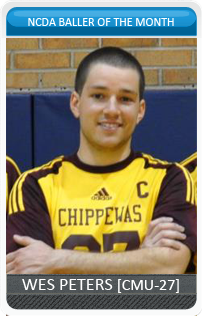 Wes has done a lot of things throughout his career at Central Michigan. He started off as a relative nobody his first season, a little overshadowed by the superstars that CMU had. Still, he won a NCDA National Championship that year at Nationals 2011. Central was the favorite heading into the 2011-2012 season, and despite not playing many games that year, teams started talking about CMU’s amazing catchers in Wes Peters and Brett Hadwin. The two were seemingly tied together with every discussion of great catchers in the league, but they both were proving to become top tier catchers. Wes tore his ACL in the spring of 2012, but not only played, but played well, on one leg at Nationals 2012.

After a huge roster upheaval, Wes became the captain and star player for the Chips. The team asked him to do more than most teams ask anyone. He had to lead, he had to be one of the main offensive threats, and he had to catch everything. CMU had typically 10 players at their tournaments, most of them rookies, and yet they were still one of the better teams in the country. Part of this is due to the fact that Wes went from being a great catcher to arguably the best. The thing that amazes me about Wes is that he rarely reaches for catches. What I mean by that is the easiest way to get an elite catcher out is to make him think he can catch something, when in actuality it’s just too far for him to snag. To get out Wes, you’ve got to throw at him and hope he can’t hold on to the catch.

Wes was recognized for his work by making the All-Star team and by being named a First Team All-NCDA performer this year. He will be the CMU Captain for the second straight year, and looks to bring Central Michigan back to their dominant ways.

Throughout the summer, Wes has been balling with some of his CMU teammates at different NCDA locales. Wes played at the Mayday Hat Tournament in DePaul over Memorial Day weekend, and has also gone to both of the Kent State summer events.

SH: You’ve gone from being an anonymous, albeit good, rookie, to in my opinion the guy with the best hands in the game. Where do you go from here?

WP: From here, on a personal level, I just need to get better. I know I’ve been gifted with a great set of hands, but I feel like there’s always room for improvement, catching and otherwise. I definitely need to improve my throw, and definitely work on my decision making when I do decide to throw alone. I don’t throw Sam Hiller speed per-say, but I feel like I get caught a lot more than I probably should. So like I said, there’s always room to improve. On a team level, the only place to go from here is to bring another National Title to Central Michigan. I know that’s a lofty goal for a team that only brought 10 players to nationals last year, but that’s really what I expect, to win.

SH: Central Michigan was the most talented team your first two years, and you won a National Championship. Last year you had a completely different team, and despite some struggles, you were still pretty solid. Still, I’m sure you guys want to be the best team. What do you need to do to get back to the level of play of the Chips’ teams of 2011 and 2012?

WP: We have a lot of work to do to get our team playing at the level we were two and three years ago, for a certainty. It all starts with recruiting though, that’s for sure. We need a few more big arms, and let’s be honest, getting a new Pat Fisher, Eric Sweet, Bryce Corrion and Mike McCarthy wouldn’t hurt either. But in all seriousness, if we can recruit a few more players that can come in and have the overall impact that a couple of our new players like Michael Riley and Tyler Frank had this season, we’ll be in good shape. Other than that, we just need to do more drills, and develop more discipline and definitely team chemistry. To be frank, and I’m sure not many teams know the unfortunate truth of this, but it isn’t exactly easy to develop true team chemistry when you’re practicing 5 on 5 every practice, and 6 on 6 on our best days. We’ve got our work cut out for us, but I think we’re going to destroy any expectations people are going to have for us this year. I just have a strange feeling.

SH: You’ve been playing with other NCDA teams and players this summer, like the Mayday Tournament and pick-up at Kent State. Has this improved your play on the court? And how has it impacted your dodgeball life off the court?

WP: Well, first of all I want to say our MayDay tournament team was the BIGGEST disappointment. We had me, McCarthy, Mark Trippiedi, Dan Shackleford, and a couple others. We flat out STUNK! We were definitely the joke of that tournament for sure. But I’m not sure between that and the couple of times we traveled to Kent State this summer have improved my play per-say, but it has certainly kept me in form, as well as amped up for the season to start. I will say this, the Kent trips definitely made me realize that my solo throw is not very strong. I got caught quite a bit. As far as off the court, oh my gosh, this summer has been amazing on these trips to Chicago and Kent. I’ve created and developed so many great friendships with people from around the league that either live in those areas, or made the trip there like we did. I couldn’t have asked for a better time nor better people to spend those weekends with. For instance, playing at CMU I was sort of bred to hate (playing) DePaul, just because they don’t take the game seriously at all, but they are an AMAZING group of people. I love each and every one of them. Next summer, seriously, everyone needs to come to the MayDay tournament, and Kent is going to host (from my understanding) 3 of these summer pickup weekends. These were easily the best parts of my summer, hands down. I want to see people coming to these from every corner of the league next year!! It is worth the trip and every dollar it takes to get there. I mean, what’s better than traveling to a foreign city for a weekend, playing dodgeball, and getting absolutely TURNED UP with some of the coolest people in the world at night?!

WP: Well first of all I want to say, and I’m sure Wes will agree with me, our name is not common at all! I don’t know any other Wes’s! But to answer the question, it’s definitely a toss up. An 81 mph ball of fire or these hands? I guess I’ll give you the answer you’re looking for with this question and say I’ll catch him.

SH: If the NCDA was DotA 2, which five guys would you draft, and who would you ban?

WP: Yessss!!! I love this question. I’d draft myself, of course! For the other four, I’d draft Wes from UK, Michael Riley from CMU, Kevin Bailey of GVSU, and Josh Sayre of Kent, and let me say this. Josh is by far the most underrated player in the whole league. I have no idea how he’s flown under the radar like this, he’s been playing for a few years now! Anyway, for the players I’d ban I’d start with Camden Fullmer, because he’s OP as heck!!! He might legitimately be the best player in the league, overall. I’d also ban Miles Shepard of SVSU, Andrew Hassett of JMU, Alex Swedowski of UWP, and Brett Hadwin of CMU. There may or may not be a total home team bias in that answer, but to be fair, I play against them every week in practice, versus not seeing everyone else more than a couple times a year.

WP: Getting a catch, definitely. I love getting a kill as much as the next person, don’t get me wrong, but there’s nothing like the thrill of getting a big catch in a clutch spot, or a spectacular catch period. Plus, you get a person in for making a catch, as well as the thrower out, so catching > throwing, all day!

WP: Simply put, I expect to become a much better player than I am now, and I want Central Michigan University to raise the trophy once again at Nationals. That’s all there is to it.