It’s pretty clear to see which college dodgeball teams are strong on the court.  We have records and rankings for that.  But now we take the time to measure some off the court success.  Kevin Bailey and I have taken a look at what we view as the top tweets for the month of January.  Below, we have listed our top tweet, and the the rest of the list in no particular order.

*Keep your levels of savagery as high as possible if you want to make the list next month!

END_OF_DOCUMENT_TOKEN_TO_BE_REPLACED 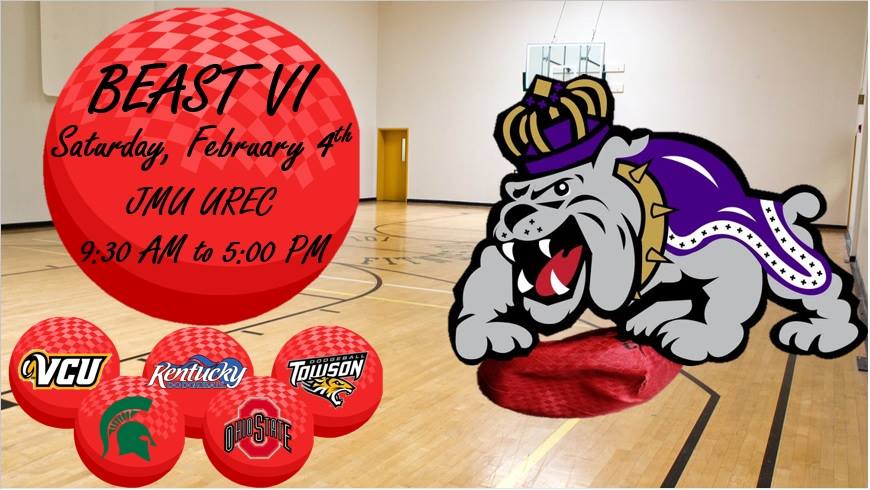 We are still in the beginning stages of the Spring Semester, but we will be off to an exciting start.  Let’s just say, this field is loaded.

This is definitely one of the toughest tournaments you’ll see in the NCDA this season.  The sixth installment of the BEAST will feature 5 of the current top 10 teams in the NCDA per Gonzalez standings, and is sure to stir the pot of the NCDA.  Every team will play 4 games each, so this will be a marathon to see who can outlast each other down the stretch.  Given all of the talent that will be on display this weekend, it would be tough to say any team has a true advantage.

To further illustrate the point, JMU, MSU, OSU, Towson, UK, and VCU have a combined record of 45-23-4, with 12 of those losses coming from playing each other this year.  Like I said, a very strong group of teams coming together in Harrisonburg, VA.

END_OF_DOCUMENT_TOKEN_TO_BE_REPLACED

For our newest installment in the “My Dodgeball Story” series, we turn to Shadeed Drakeford, founder of the VCU Dodgeball Club.  Here he tells his story about the creation of the team, his experiences while being the leader of the team, and the new role he has on the team.

A long time ago after the annual Chick-fil-A dodgeball tournament in Richmond, VA, my best friend Micheal Tse and I were walking back to my apartment talking about dodgeball and the possibility of playing after our college days were done. This took place in October 2011, several months after the historical Final Four run by VCU in the NCAA Men’s Basketball tournament. The conversation started off very casually and jokingly with talks of playing semi-professionally along the East Coast with the potential of winning cash prizes or free food. After all, who doesn’t like free food? Yet, small talk created curiosity in me, and I stumbled across a hidden gem which has been around since 2004, the National Collegiate Dodgeball Association (NCDA).

In December 2011 as a Christmas present to myself, I completed all of the paperwork that was necessary to have the Dodgeball Club at VCU as an official student organization. Little did I know my life would never be the same again. When I first came to VCU, there was actually a very big showing for people who wanted to play. Back then, we exclusively played what we called “medic” dodgeball against other students and it would bring in large crowds of people. But over time, dodgeball at VCU was shrinking in size every single year. It started out strong with at least 100 people playing medic dodgeball every Friday from 2-4:30 p.m. in my freshman year to only 20 people playing medic dodgeball three times a week in my junior year. Once I made the club in those later years, the purpose of the club was to create some stability and a strong perception of the sport around VCU, so that we would have some gym time every week. For anyone who has ever attended VCU, dodgeball time was always cut short on a weekly basis due to soccer, and never really got the respect it deserved compared to the other sports.

END_OF_DOCUMENT_TOKEN_TO_BE_REPLACED

After a long hiatus, we are back to our Team Spotlight series.  We will be covering the Golden Flashes of Kent State, as they prepare for their tournament this weekend at the University of Kentucky.  I had the pleasure of interviewing current captain Cassie Weaver, as she goes into depth about her team and what to expect from them in the coming semester.

END_OF_DOCUMENT_TOKEN_TO_BE_REPLACED

Dodgeball is back y’all. Finally the Kentucky and Ohio regions get a piece of the action in what looks to be one of the most exciting semesters in recent NCDA history. UK hosts Western Kentucky University, Kent State University, and Ohio University this weekend. This tournament has a lot to offer for all five teams. Kent State and Western can break out of the middle of the pack, OU can get some good experience and pick up some quality wins, and UK seeks to continue the successful season thus far. Here we will look into each team and what to expect come Saturday.

END_OF_DOCUMENT_TOKEN_TO_BE_REPLACED

New year, new dodgeball.  We hit the ground running quick for the Spring semester of the 2016-17 season, as Penn State University hosts their first ever home tournament.  A total of four teams will be mixed in the fray including our hosts, Akron University, Ohio University, and Virginia Commonwealth University.  This tournament has a similar feel to UNG’s Dahlonega Dodgefall Fest.  There is no clear favorite, and most of the teams here are around the same rank and skill level with each other, which could prove to make for an exciting weekend.  Let’s take a quick look at what to expect from the attending teams.  END_OF_DOCUMENT_TOKEN_TO_BE_REPLACED

For the newest addition in our Team Spotlight series we take a look at the Penn State University Dodgeball Club.  The team out of University Park, PA has been a member of the NCDA since April 12, 2013.  I had the opportunity to talk with Club President, Jeff Schwartz, about his squad and the upcoming semester.

END_OF_DOCUMENT_TOKEN_TO_BE_REPLACED

There have been a lot of major developments in the league just within this past semester.  We have seen the appearance of some brand new teams, the emergence of teams who were once pushovers but now look like legitimate contenders, and some new players have stepped into the spotlight.  Overall, this was a very successful semester in the NCDA, in large part thanks to leadership from across all teams in the league.

Now is where things start to intensify.  We are inching closer and closer to Nationals, and there are a lot of teams and people to watch out for this upcoming semester.  In order to stir the pot and get people thinking, I wanted to throw out some of what I consider to be bold predictions.  Feel free to ridicule me in the comments below.

END_OF_DOCUMENT_TOKEN_TO_BE_REPLACED

Following the Whitewater Winter Bash at the University of Wisconsin-Whitewater (UWW) on December 4th, there are no more scheduled tournaments for the remainder of the 2016 calendar year.  This has certainly been an active year in the NCDA, with many brand new teams, even more tournaments, and overall, tons of dodgeball.  As a result, I wanted to take the time to highlight some of the league leaders in some interesting stats (or at least what I thought was interesting) over the course of this season.  With that being said, let’s take a look at some of these “key” stats.

END_OF_DOCUMENT_TOKEN_TO_BE_REPLACED

We actually have a special treat for this month’s Baller of the Month, as we are awarding a Co-Baller of the Month award. For the month of November it is Kyle Dattelbaum and Liam Bartlett of the University of North Georgia.  Both serve as captains for the team, and have had a significant impact on getting their brand new team up and running for the 2016-17 season.  They are being awarded for their start-up accomplishments, along with their performance during the Dahlonega Dodgefall Fest.

END_OF_DOCUMENT_TOKEN_TO_BE_REPLACED

Welcome to the first of hopefully many articles in our new Team Spotlight series.  This is where we take the time to talk to teams around the league and give them a chance to highlight some of their successes, planned events, and any other topics of interest.  For this week, we have selected the University of Kentucky.  I had the pleasure of interviewing their current President, Zach Parise, to get some insight on everything UK Dodgeball.

END_OF_DOCUMENT_TOKEN_TO_BE_REPLACED

The University of North Georgia hosted their very first tournament, the Dahlonega Dodgefall Fest, this past weekend (and for anyone still wondering, it’s pronounced “duh-lawn-eh-ga”).  Visiting teams included Georgia Southern, Virginia Commonwealth, and Western Kentucky.  It was an interesting tournament with some pleasant surprises and takeaways from the event. Ultimately, WKU came out of the event as the big winners, moving up from #12 to #10 in the Gonzalez rankings after finishing 3-0 on the weekend.  Here is a quick recap of some of the observations made throughout the day, and the implications and things to watch for going forward.

END_OF_DOCUMENT_TOKEN_TO_BE_REPLACED 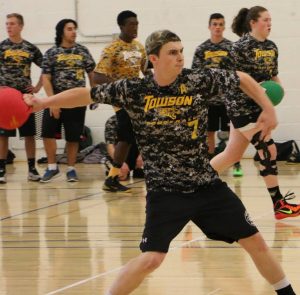 The October Baller of the Month has been awarded to Towson’s Michael Hinely.  The Junior serves as one of the Captains for the Towson Dodgeball Club, and has played a very big role in the continuous improvement and advancement of their program.  As a friend and competitor with Hinely over the course of our careers, I can personally say this was well deserved.

END_OF_DOCUMENT_TOKEN_TO_BE_REPLACED 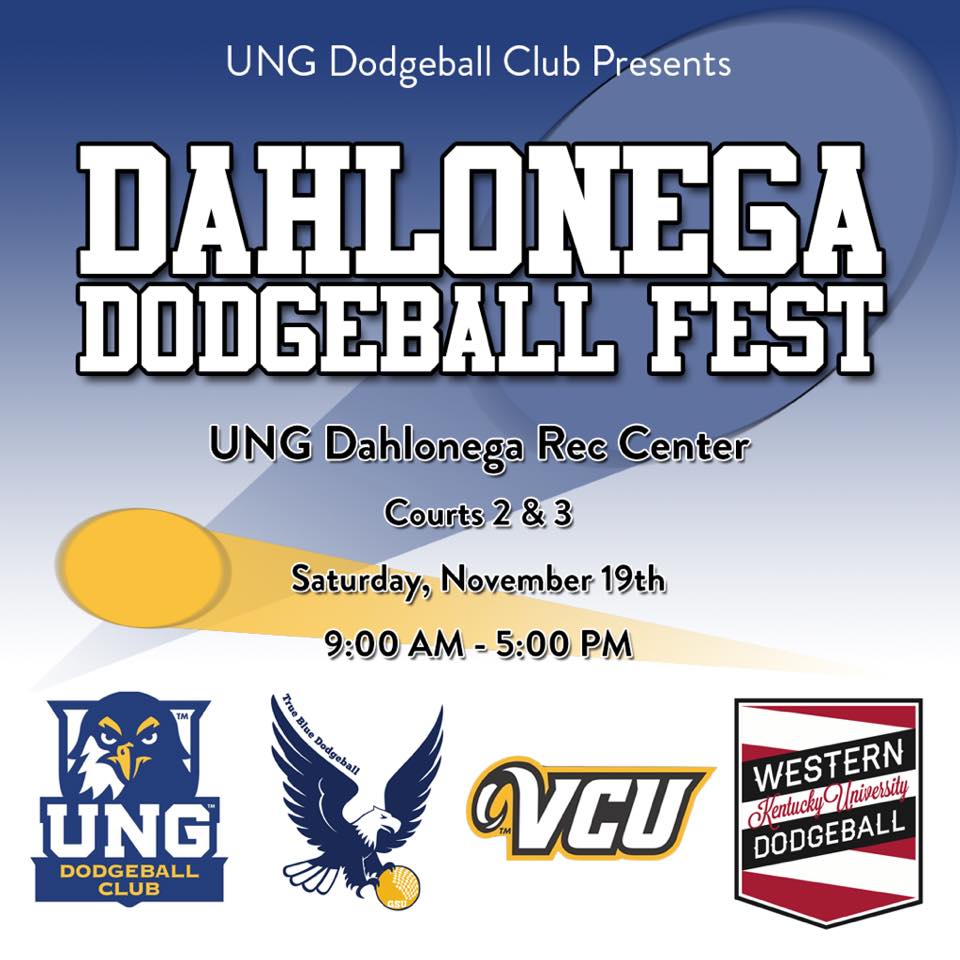 This will be interesting to see.  In only their first semester officially in the NCDA, the University of North Georgia (UNG) will be hosting a tournament which features themselves along with Georgia Southern University (GSU), Virginia Commonwealth University (VCU), and Western Kentucky University (WKU).  As mentioned previously, UNG is brand new team, and so is GSU.  These two teams previously faced each other in a doubleheader at GSU, but now both will get the chance to play against some veteran teams in the form of VCU and WKU.  As I said before, this will be interesting to see, mainly because all of these teams currently sit in the middle of the pack standings wise.  Currently, UNG, VCU, WKU, and GSU sit at #10, 11, 12, and 18 in the Gonzalez rankings respectively. Because of this, there are a lot of points to be gained this weekend for any team that emerges on top.