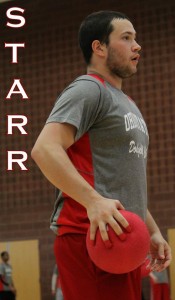 Jeff Starr is easily the most well known player in Ohio, and for good reason, he has been a staple for the Buckeyes for years now and has no plans of slowing down. He has a powerful arm, great catching abilities and veteran court awareness that make him a threat for anyone on the opposite baseline. His abilities rival that of any player in the league. Jeff is well deserving of the recognition that he earns. I don’t think I could find many flaws in his game if I was paid to try. His skills have made him a household name in the NCDA and he will go down as one of the true greats. 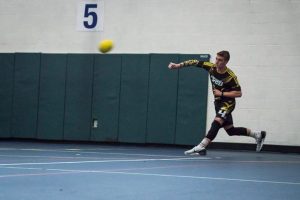 Hunter Ford was a relative unknown last year, and became one of the most talked about players in the entire NCDA. His leadership and on court abilities earned him this spot on the list. This year was VCU’s most successful since the program’s conception, and Hunter is a prime example of why. They played the most matches of any other team in the league and definitely tacked on the experience for this young squad. Hunter is a presence on the court. His skills on the court are almost as fire as his social media game. Him, along with his signature eye black will be back next year, and you will hear more about him. 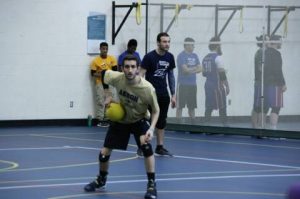 Joey Stack is a standout player of the Akron dodgeball program and Ohio as a region. He has the catching ability to make all who oppose him think twice about throwing, and he is as dominant as they come. The Zips would suffer without $tack$ and his unrivaled court presence. He is an original member of Akron and is easily the most well rounded player on the team. Joey can catch, throw, dodge, dip, dive, duck, and dodge with the best of them. He was an all-star this season and it surly won’t be his last appearance. If you don’t already know what Joey can do, play the Zips, and you’ll find out. 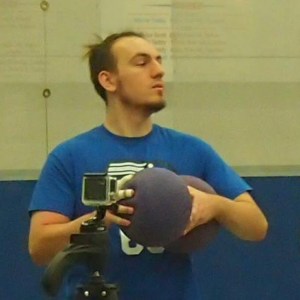 Brian certainly had a lot to be proud of in his final season with the DePaul Dodgeball Society.  He was the 2016 December Baller of the Month, helped lead DePaul to the most wins in a season in their program’s history, and impressed many at Nationals this year.  While overcoming a hand injury, he still proved to be one of the best catchers in the league.  He was a serious competitor that helped keep the Blue Demons in all of their games this season and was a staple of their overtime six squad.  Without him, DePaul would have had a much harder time this year.  He will certainly be missed. 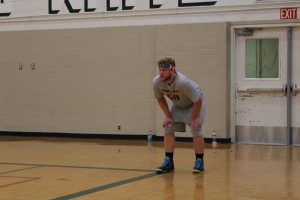 Alex Holzgen graduates earning himself a 2nd Team All-American distinction. A balanced player for Central Michigan, with a powerful throw and instinctive catching skills, Alex certainly became a well-known athlete on the Chippewas’ roster. Over the past 3 seasons Alex went from a rookie, to an All-American level player, while leading his team to 3-straight National Title Games. Impressive stuff. Congrats on the honor, Alex. 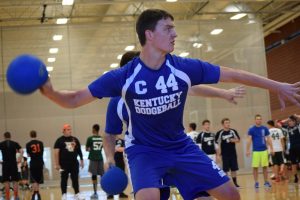 Colin was a true leader for the Wildcats this year both on and off the court.  His entire career he has played with a team first mentality, and fought hard for them all year.  Colin’s throw has developed a lot during his career, and has helped him elevate his game to the level where it is now.  Many of his teammates respect the work he has put in, especially while being the main coordinator for Nationals this year.  Everyone will be interested in what UK is able to do next year, and replacing another leader like Colin will be no easy task. 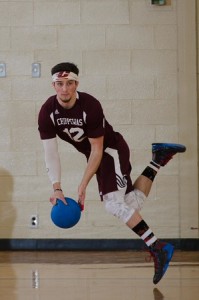 Another Central Michigan Player to make this list in Ian Ryan. Ian joined the CMU squad during it’s lowest point. He, along with a number of other stars on this team, helped build CMU into a program feared by the rest of the league. Ian has been one of the top arms for CMU over the past few seasons, while also making a clutch catch from time to time. If he returns for another season, CMU will be a title contender. If he does not come back next year, the Chips will have some big shoes to fill. 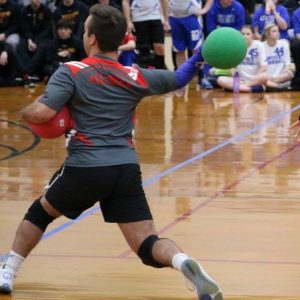 Kyle was a newcomer to the NCDA this year as one of the founders of the University of North Georgia Dodgeball Club.  However, he didn’t play like a newcomer.  All year he helped carry the Nighthawks as both an administrator and player, and his efforts didn’t go unnoticed.  Perhaps his highlight of the year was when he lead a 13 to 3 comeback to win a point against the University of Miami (OH) at Nationals.  His ability to maintain composure and make catches in the clutch is something to behold, and he is very accurate with his throws as well.  If North Georgia can make it to more events next year, expect him and his team to continue to impress everyone.

Josh Wynn has been a relatively under-the-radar player for WKU since the 2013/2014 season which makes him all the more powerful of a weapon. Josh has been through some of the brightest and darkest days of WKU Dodgeball, but continues to be a beacon of strength in this forever-young squad. Josh gained the attention of his peers this year during the 2017 All Star Game, presented by SAVAGE, with a few incredible outs and catches against some of the NCDA’s top tier players. While his career at WKU is coming to a close, I think anyone who has played against him over the years would agree he is not only a gentleman, but also one hell of a baller. Also, he’s quite the looker

Tyler has been an important piece for the Falcons for a long time.  Now, he gets recognized for the contributions he has made to this team.  A strong leader on and off the court, there are not many people that have the type of energy he does when it comes to playing the game.  He is an impressive all around player who can block, catch, throw, and do anything his team needs him to do in a big moment. 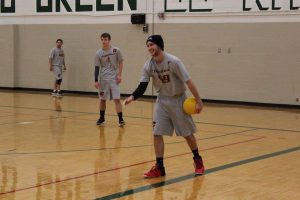 Yet another Central Michigan player on this list is Shane Willette. Shane has been an underrated guy for the Chips for years, and has narrowly missed being 1st Team All American for a few seasons now. But there is no question he has had a huge impact on CMU. Shane has been an integral part of the Chippewa offense the past few years. When he is playing great, CMU is hard to beat. When he is struggling, CMU is in a tough spot. Shane graduates leaving a massive void on the CMU roster. His offensive production will need to be replaced in the Chips hope to make it back to the title game in 2018. 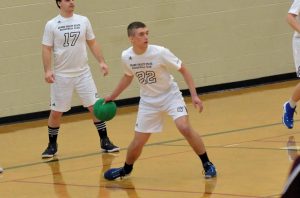 Grand Valley State Sophomore Aaron Krafft had a solid year for the Lakers. He was consistently a member of their overtime roster, and often came up with big plays for his team. One of the most talented players on the court, I expect Aaron to use his balanced skillset to his advantage more next year, and really make a splash as a 1st-Team All-American candidate.

Jake was an important veteran player for a rebuilding Buckeyes team this season.  He has an incredibly strong arm, and he is able to hit his targets with good precision.  While his throwing ability stands out the most, he is an underrated athlete as well.  Next year will most likely be his final season with OSU, and you can expect him to end his career with a bang. 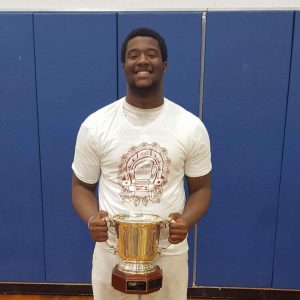 Ray Franklin burst onto the scene late in the year as one of the most feared guys on the court. His throw speed of 79mph is tied for the top in the NCDA. Opponents certainly started taking note at Nationals, as Ray was one of their main targets on the GVSU roster. The Sophomore for GVSU is set to have a true breakout year in 2017-18 as he will be relied upon heavily as a thrower for the Lakers. If he can become a little more consistent with his performance, he may end up seeing his name near the top of the AA list in 2018. 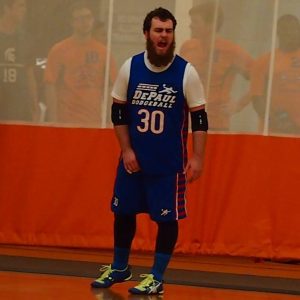 Perhaps better known by his jersey name, “Captain Fluffy,” Alec has been a major influence on DePaul’s program this year.  He brings a fire and passion on the court that is rivaled by few, and his competitive nature would make any team better.  Alec has a cannon of an arm when he gets going, and was certainly the primary power thrower for DePaul this year.  He will be back next year to lead a DePaul team that will need to replace Tyler Hamilton and Brian Hymel.  If anyone can do it, it’s Alec.

Curious to see who else received votes?  Check it out on the google sheet here!  Stay tuned for more exciting news in the next few days, too.