The temperature was in the negatives in East Lansing, Michigan on February 14th, but inside IM West, the competition was heated as four of the top teams in the nation squared off in the Michigan Dodgeball Cup.  The 2015 MDC was expect to be a classic, and while only one of the matches was decided by a one point margin, the MDC still was an entertaining tournament. 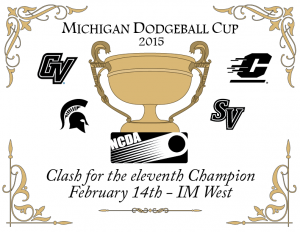 Grand Valley State took the title, going 3-0 on the day with an average win margin of 3.33 points per game.  The Lakers were the expected favorites heading into the tournament and they lived up to the hype.

Central Michigan secured second place at this tournament with their only loss coming to Grand Valley.  Central Michigan didn’t have a breakout day, but they proved why they deserve recognition as a top level team.

Saginaw Valley entered the tournament with little hype and little experience.  Saginaw came out on fire winning their first match over Michigan State, and taking a lead on CMU before falling to the Chippewas.  While it wasn’t SVSU’s best day, they proved they are still a competitive team.

The host school, Michigan State did not have their best outing on Saturday.  The Spartans went 0-3, but the puzzling part is that they were close in every match, compared to SVSU and CMU who both had blowout losses.

Overall the MDC was a quality tournament to say the least.  Each team showed flashes of greatness, but also showed weaknesses.  The Michigan Dodgeball Cup was top to bottom the best tournament of the regular season so far.  Here is a brief recap of each game that was played on Saturday:

The first match of the day was a bit of a back and forth battle.  The first point took up the majority of the time in the first half, with Saginaw Valley rallying late to take a 1-0 lead.  During the first point of the day, it was obvious that Saginaw was relying heavily on their top end players, and in this situation it worked.

Michigan State was able to storm back and eventually take a 2-1 lead on the Cardinals, but once again SVSU rallied their way back and finished the game with a 4-2 victory.  This ended up being the only time either of these teams would win a match at the MDC, but the level of talent was still very high during this game.  The 4-2 final score was much higher than I would have expected from this game, but both teams were able to pick up the pace when needed, so it ended up being a high scoring affair.

This particular match was receiving quite a bit of attention leading up to the mdc, and rightfully so.  The last few matches between CMU and GVSU had been close games.  This time around, it seemed like GVSU was able to do whatever they pleased against the Chippewas.  Whether Grand Valley was just more prepared for the game or CMU happened to come out flat is up for debate, but this game was all but decided by halftime.

GVSU used a fast paced offensive game plan to take two points per half from CMU, setting the tone for what would be a dominant day for the Lakers.  On the other hand, this game was not an indication of Central would perform the rest of the tournament, they just happened to start poorly.

This was one of the more interesting games of the day in my opinion.  The difference between points was polarizing.  Grand Valley started the game in unstoppable fashion, taking a point in just over four minutes!  But instead of giving up easy, MSU was able to use a slow methodical pace to take the next point shortly before the end of the half.  The Spartans relied heavily on their catching ability to take the point before halftime.

The second half was a much different story, while MSU kept it fairly close, they still gave up two points in the final 25 minutes, handing GVSU their second win of the day.  Despite the loss, MSU played a solid game, showing a lot of potential.

Central Michigan vs. Saginaw Valley State was another interesting game.  On one hand, SVSU was playing for a shot at winning the title, while CMU had a slim chance at winning after dropping a game to GVSU already.  If SVSU had won this game they would face GVSU in the final match to decide the championship.

Saginaw Valley came out fast once again, and took the first point.  From there the game flipped in CMU’s favor as they rolled to four straight points.  The difference in this game was CMU’s superior defensive game plan.  Central caught far more throws than their opponent and did a much better job blocking for their teammates in transition.

Arguably the best match of the day (although at times it was the slowest), this game went down to the wire!  Michigan State started the game playing very organized dodgeball.  MSU relied on their top throwers to get a few crucial outs, while they also took advantage of some CMU solo-throws with a number of clutch catches.  Mid-way through the first half, the Spartans held a 1-0 lead, and look like they were positioned to finally win a game at this MDC.

Point two was far different, as CMU once again recovered from a slow start to the game by playing a strong second point, evening the game at 1 with three minutes remaining in the first half.

The decisive first point of the second half was an adventure to say the least.  I don’t even want to estimate how many catches each team had this point, but it was a whole lot.  I’ll attribute the high amount of catches to both teams ability to catch as opposed to weak throwing late in the day, but it was possibly a mixture of both.  Neither team was able to finish off their opponent for the first 20-25 minutes of the second half, but with a few minutes left this match got crazy.

Central Michigan was down to only 4 or 5 players, while their opponent still had close to half of their 15 on the court.  Thanks to a number of huge catches by Jacob Leski and Mike Riley, CMU swung the momentum of the game in a matter of minutes.  After a shot clock violation by MSU, Central used a few well-placed team throws to drop MSU down to one player, and at that point they crowded the front throw line and made a catch on the last Spartan standing to take a 2-1 lead with less than two minutes to go.  CMU came away with a victory in the closest match of the day.

The final game of the day was anticlimactic.  Both team came out fired up for the first point, and it was competitive for most of the first half, but GVSU offensive strategy was again too much for their opponent, as the game was all but decided by halftime with GV leading 2-0.

The second half ended up being an opportunity for both teams to get their younger players some valuable experience, as both teams cleared their benches and rested their top players.  It’s worth noting the Saginaw had injuries to a few of their top players, so they were not at their best in their match against the Lakers.  GVSU finished with a 4-0 victory, and after a long day of dodgeball they were able to celebrate an MDC title.

There were too many strong performances to name everyone, but here are two under-the-radar players who stood out to me:

Kameron Caldwell (MSU #57) played a great tournament for the Spartans.  He consistently came up with clutch catches helping MSU climb back into a few points, and even sealing their one point against GVSU with a catch.

Alex Holzgen (CMU #59) had himself a day at the MDC.  He performed spectacularly for a rookie player, and was a huge impact player for CMU in both of their victories.

Riley Robson (MSU #5) was one of the hardest throwers in the building at the MDC.  MSU counted on his arm quite a bit throughout the day, and he did his job pretty well.

Jesse Hoffman (SVSU) was by no means the best player on Saginaw’s team, but he impressed me with his consistent play and solid throw.

As a whole, the MDC was a successful tournament.  Not only was every single game from the 2015 MDC filmed by Michigan State, but each match was also live-streamed online thanks to Dylan Fettig (GVSU #24, NCDA Director of League Expansion).

CMU’s Jacob Leski was able to get a professional photographer (Alan Holben) to take photos for each match and they turned out great!

While not all of the games were extremely close, each game was filled with quality dodgeball.  The tournament was run well by Colin O’Brien and MSU, and the refereeing was solid in each match.  Overall, the 2015 Michigan Dodgeball Cup was a credit to the sport of dodgeball and I was proud to have been a part of it.