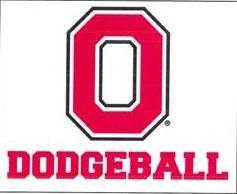 Last year was a bit of a surprise year for the Ohio State Buckeyes. The team was very young, and very inexperienced in NCDA play. Seemingly out of nowhere, the Buckeyes showed up to Sunday at nationals and gave host Kentucky the game of their lives in the second round. I recently talked with head boss man Ryan Carlton to ask him about his team, his expectations, and his dancing abilities.

SS: To start, I’ll be honest and say I don’t know anything about Ohio State dodgeball. What can you tell me about your team that gives me and other people who don’t know who you are an idea of what you guys are about?

RC: We are all about having fun and trying to become better individual players as well as being a better team. Ohio State has always been known for our ability to catch the ball, but recently our team has been changing. We have a very young team but we are still known for our catching; we now have some strong arms that make us more well rounded.

SS: For this upcoming year: what makes you guys a good host for this years national tournament?

RC: Our location, being in Columbus, Ohio, is the number one reason. We are the most centrally located for all teams, plus we have one of the largest and nicest recreational facilities.

SS: Fair enough, so how do you expect your upcoming season to go with what you’ve seen so far?

RC: Last year started off rough for us. We went 0-4 at our own tournament but that was to be expected. We had some of the best teams there and our team was very young, for some it was their first games ever. But those loses really instilled the will to win in our team and when it came to nationals last year, I couldn’t have been happier with the way we played. We took, I believe, 12 freshman and sophomores to nationals last year and they are all returning. Yes, we lost a few people including Jude DuPart but with us bringing back so many, I expect big things. As of right now we are still a work in progress and I think it will take a little time to get us to our full potential, but I expect us to come together and play some great dodgeball.

SS: Alright and are you guys traveling to Kent on the 21st?

RC: Unfortunately not. The Ohio State football team has a home game on the 21st and many members have tickets to go, so we wouldn’t have enough players or drivers to get us there.

SS: Bummer. So since that gives you guys more time to prepare how do you think your team will fare in your first tournament whenever that will be?

RC: I think it will help us and hurt us. It helps us by getting more time to prepare and work on our throws and catches but it also hurts us.There is nothing better for a team to learn from then an actual match. Playing other teams is when you can actually see where you are and what you need to work on. When you keep playing against the same people you learn their tendencies, you know exactly what they are going to do, where they throw and how hard they throw and cam make you get too comfortable. There is no way to simulate the unknowns of the other teams and that is a weakness. I believe we will be ready to play but possibly a little rusty. It may take a game or two to get back in the grove but I expect nothing but the best from my guys.

SS: Alright and if you had to pick one team you haven’t played before who would you like to play?

RC: Is this a trick question?

RC: Well it would be between Towson, Maryland and Penn State. But if I had to choose just one, that is a hard choice.

SS: What do you think will be the biggest help to your team by hosting nationals?

RC: Having our family and friends there to support us. At last years nationals when we were up 2-0 at half against Kentucky, the home crowd got really into it and really fueled UK. So I believe our friends, family, and fans will be the biggest help to us.

SS: Alright now for some fun questions. With your last name being Carlton does that mean you were born with the innate ability to do The Carlton?

RC: No, unfortunately I was not. I actually didn’t know there was such a dance till I was in High School. After my teacher called out my name for attendance on the first day he asked me if I knew the Carlton Dance and had no idea what he was talking about but later learned what it was. Well after being asked so many times if I knew by the other kids in my classes and my other teachers I decided to learn it. So I now know how to do it, so I can answer yes to their questions but no one has ever seen me do it. I have never done it for anyone out of spite of the question.

There’s you head guy for nationals 2014 everyone! I won’t say more than this: if anyone can get Ryan to do The Carlton Dance deserves their own trophy! Hopefully Ohio State’s facilities live up to what Ryan has been saying about them. I also hope the team holds up to what I’ve been hearing other captains say they expect from OSU this year. This should be a great year coming up for the Buckeyes.