Towson Dodgeball has come a long way since their formation in 2011. The Tigers experienced the typical growing pains that comes with joining the league, but an upset win over Ohio State at Nationals 2015 allowed the program to turn a page. The following season saw a spark in interest and recruiting, which allowed the team to rise in the rankings, and start competing with the top teams in the league. Despite the rise in regular season wins and success, Towson developed an unwanted reputation of routinely struggling on the Sunday round at Nationals. In the 2018-19 regular season, Towson put together a 23-4 record, and rose to a number two ranking. At the end of the season tournament in Allendale, they exercised the demons of the past and defeated six-time defending champions, Grand Valley State University, to win their first ever National Championship. Towson will continue to be a household name on the East Coast, and throughout the NCDA for the foreseeable future. 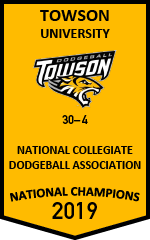