Traditionally hosts the Battle of the Valleys versus GVSU, every other year.

Founded in 2007 by Bryan Janick, the Saginaw Valley State Dodgeball team was created to spread the joy and amazingness of club dodgeball to the campus of Saginaw Valley State University. As a co-ed club sports team we find ways to stay on a competitive level with the NCDA while maintaining a balance of fun someone would expect from a club sport that plays a child’s game.

SVSU won its first National Championship in 2012, captained by Spencer Jardine, while hosting Nationals in the brand new Ryder Center. Saginaw is also nicknamed “Death Valley” due to its rabid club sports following on campus; something opponents will openly admit as the most intimidating environment to play in. 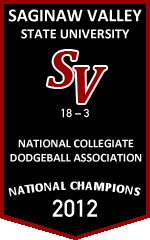