The club was founded in 2008 by Kevin Flynn and a few others.

The club’s proudest moment has to be when we won the National Championship back in the 2010-2011 season in Bowling Green, Kentucky! A close second definitely has to be defeating eventual 4 time National Champion GVSU in the MDC in the 2009-2010 season, giving them their first loss in several years. You could definitely say CMU Dodgeball came a long way in a very short period of time.

The club looks to win its second National Championship in the near future and be as competitive as ever. 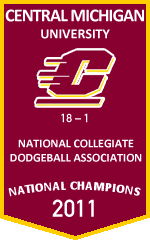