Traditionally hosts the Chicago Dodgeball Open. Additionally, DePaul Dodgeball hosts the May Day Dodgeball Rally after Nationals. This event is conducted in a hat tournament style, with a general invitation to anyone to play.

DePaul Dodgeball is proudly co-ed, the oldest team in the League, and predates the NCDA. DePaul has also been steadily involved in refining NCDA policy. To note a few contributions, its members have drafted numerous rulesets and ranking systems.

Nicknamed the Court Jesters of the NCDA by their peers, DePaul plays the game as our childish forbearers did. Our games are a juvenile program of delinquency, where the headshot hug rule substantiates our collegiate goals and ambitions. 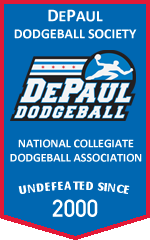