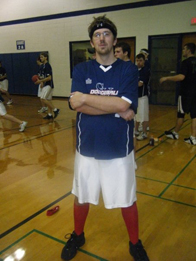 After four years of playing and being president of the Delta College Dodgeball team, Ben Murphy has left the team to pursue other interests.

What do those interests include? Playing for Saginaw Valley State University’s team.

“I had four great seasons at Delta College,” Murphy said.

“It was just time for me to move on. I graduated from Delta back in April of 2007. I stayed last year because my job required me to take classes there and to play dodgeball.”

While there Murphy saw his team reach three consecutive national final-four appearances and set a single season wins record in the NCDA in the 2008 season with 17 victories.

“We had a special group of players these last three seasons,” he said. “My time there will be something I will never forget.”

As for whether he is going to miss running a team that he founded back in 2004, Murphy isn’t going to deny it.

“There is no question that I’m going to miss being at Delta,” he said. “In fact I already do. But I am already having a lot of fun and learning to play with a bunch of great new teammates.”

There was also something that he wasn’t quite used to when he fist took the court for SVSU.

“I can just go to practice and focus on playing dodgeball and nothing else,” Murphy said. “I don’t have to worry about who isn’t playing well and who isn’t at practice. I can just focus on my own game and helping my teammates out on the court.”

On Sunday, Oct. 26 Murphy saw his first game action with the Cardinals against Michigan State University.

“It was weird being out there in a different uniform,” he said.

“But I was so excited to get my first kills and catches with a new team it was unreal. I just hope I can keep improving my game so I can stay on varsity for the rest of the season.”

Taking over for Murphy at Delta is David Halloran, who will be entering his fifth season with the team. Halloran served his previous four seasons as a captain and vice-president.

“The team is in good hands with Dave,” Murphy said.

“A big reason that Delta was so successful over the years is because of him. He understands the team concept and the hard work it takes to win dodgeball games more than anyone I’ve ever met.”

Halloran is excited as well to take over the club, and hopes to get the team over the hump and into the national championship game.

“Taking over the team has proven to be something more than just stepping into the shoes of the past president,” he said.

“It’s been challenging, yet very rewarding. The team looks great and I’m excited about the young talent that keeps coming through the door. I expect to be a national contender and I can only see third place as the last option.

You might be wondering on if Murphy is going to be rooting for his former team.

“I really think that SVSU is going to be a great team this season,” he said.

“But if Delta happens to win it all I hope they don’t mind me stealing one of their championship t-shirts.”