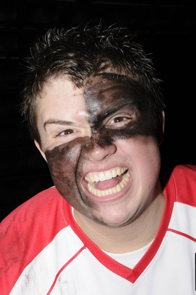 Since the inception of the National College Dodgeball Association (NCDA) in 2005, the performance of teams just joining the ranks of the dodgeball wasn’t the best to speak of.  Not that they played terribly, but they were just feeling out the game and playing against more experienced teams.

In fact, since then almost every team competing in its first season has come up at the end of the year winless. I don’t want to sound all gloomy on teams that didn’t fare so well last year and the teams that are about to embark on their inaugural season.  There is a ray of hope for those who are in their second season.

Last year there were three teams who competed for the first time in the NCDA, including Central Michigan, Western Kentucky, and Wisconsin-Platteville.

Kevin Flynn of Central Michigan has high hopes for his team this year.

Flynn also said that this season would be a learning season again but they are just trying to build their program and have fun doing it.

Western Kentucky also suffered a winless season last year but they have intentions of competing for a few wins this season.

“I think we got enough people coming back to help the new guys out. We are going to get a head start over what we had last year for sure,” Western alternate captain Ryan Graham said. “Last year there were a lot of rules we didn’t know about and also things we weren’t clear on.”

Graham said that last year was a good year in that they gained knowledge of basic game strategy and got some good experience.

Wisconsin-Platteville is aiming higher this season according to Curt Weyenburg, who is acting Vice President for the team.

Like the other teams last year Wisconsin-Platteville struggled through their first season. The different style of play, lack of talent compared to other teams, and the fact that their team was young were determining factors for the sub par season last year.

But just like the other teams coming off their first season, Wisconsin-Platteville is definitely looking forward to the upcoming season.

Weyenburg cites future success on more new talent coming out to play for the team.

Going into the season last year, recruiting was taken more seriously than the previous year. Also the fact that Saginaw Valley just had more fan support helped them last season.

From their first season record of 3-6, Saginaw Valley improved to 11-7 with four of those losses coming to Grand Valley State.

After their successes last season, Saginaw Valley is hoping to compete for a national championship while actually roughing with some of dodgeball’s professionals in Auburn Hills soon.

So look for the teams that are coming back this year to become forces to be reckoned with this season. You never know, they might even dish out a little pain of their own this year.