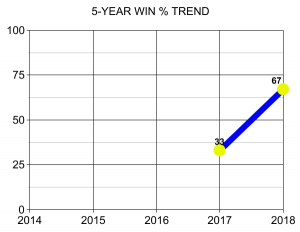 Season Preview: In UNG’s short lifetime as a program, they’ve been able to play at a high level in the developing South region. Due to their minuscule roster turnover this season, UNG is in place to repeat their title of Kings of the South. With events in place to have their usual southern competition (GSU, UCF, NSULA) UNG will need to take an initiative to schedule other region clubs to possibly get over their performance plateau at Nationals.

The Good News: The roster is in place to preform at a high level. With the only departure of Kyle Dattelbaum, this is a roster that played short of 12 players at Nationals. With that being said, this team ended up taking Akron and Virginia (two teams referenced to arguably be top 10 contenders) to 2-1 final minute losses. So if UNG will be able to bring full rosters with possibility of substitutes, the club should be put on watch. And it’s rumored a couple of new studs have came into the program to round out the core roster.

The Bad News: The Boars Head Brigade. UNG being known as the military college of Georgia face a consistent problem of scheduling. Cadet participants are often tasked out with “closed weekends” which gives the club troubles with traveling (a large portion of the student body attends the school to commission as 2LTs into the U.S. Army) Second, as the club moves on from their original leader, NCDA clubs often see a step-back as an organization as they transfer leadership roles for the first time.

Our Call: While it is certainly going to be tough for this team to replace their program’s GOAT in Kyle Dattelbaum, it’s easy to be excited about the future of the Nighthawks. Ultimately, we fully expect this team to continue to perform well against their regional competition. Against teams further out it’s reasonable to see this team finish around the .500 mark based on things we’ve seen from them in the past.