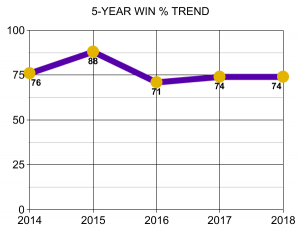 Shawn Donahue (A)
Tyler McDaniel (A)

Season Preview: The expectations are pretty much as high as they’ve ever been for this team who has a long history of success.  All signs point to another big season for JMU.

The Good News: This team is deep and I’m sure they’ll only expand upon their depth with a new freshman class. JMU consistently churns out athletes and this year will be no different. The Dukes are headlined by All-American Evan Eschenburg, who will take the reins this year and be accompanied by *insert names of JMU assistant captains*. Any team that is as deep, talented, and athletic as JMU will be this year has a chance to make a run at a title. This team has the potential to do just that.

The Bad News: *See above for key losses* That’s about where the bad news ends for JMU. You may only see two names, but those two names aren’t to be taken lightly. Doug Schilling was an absolute monster during his time with the Dukes. He was their unquestioned leader on the court and was the face of JMU dodgeball. They also lose Evan Bosanko, who wasn’t able to play last year due to injury, but still helped lead and coach his team from the sidelines. If JMU has guys ready take the place of their graduates, they’re in good shape. But don’t be fooled, those are big shoes to fill.

Our Call: The Dukes will probably dominate the East Coast this year and it’s not hard to see why.  They have a great track record and are probably even better than the team a year ago. Our short term outlook is very positive.  On paper it’s hard to find a more talented roster, but we will have to let their results, or Twitter, speak for themselves.