END_OF_DOCUMENT_TOKEN_TO_BE_REPLACED

Below is the schedule for tomorrow’s event.

END_OF_DOCUMENT_TOKEN_TO_BE_REPLACED 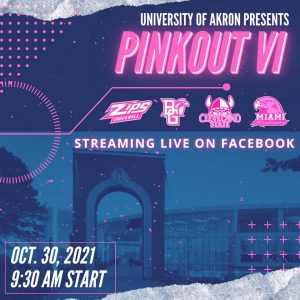 The teams that will be attending are: BGSU, Miami, Cleveland State, and of course Akron. The Pink Out is typically Akron’s fall tournament in October to raise awareness for breast cancer by wearing pink with their uniform whether its socks, headbands, wrist bands, or even shoes. Although this is the significance behind the naming of the tournament, It has evolved to be more about raising awareness for any cause instead of just breast cancer: NCDA players can represent something greater than dodgeball.

This marks the 6th time that teams will compete at the University of Akron in October for the (formerly) annual Pink Out Tournament, hosted by the Zips. The teams in attendance will be the Redhawks from Miami, The Bowling Green State University Falcons, and The Cleveland State Vikings. The three visiting teams will all be competing in their first matches of the season, with the hosts competing in their second tournament this year. I asked the attending school’s captains what their takes and expectations for their teams are when they compete this weekend, as well as some stand out players to watch out for on their squad.

At the Viking Cup, several teams went head to head for some quality matches to prepare for nationals. Several of the games were close and tested teams’ ability to fight and go for the win. Below are the scores for the day and captain’s thoughts on the teams in attendance.

END_OF_DOCUMENT_TOKEN_TO_BE_REPLACED

On February 22, 2020, we have a great mix of teams attending the Viking Cup that should make for some fun matches. There are two teams from the Michigan and Midway regions, and one each from the South and Ohio regions. The teams in attendance will be: Cleveland State University (CSU), Saginaw Valley State University (SVSU), Western Michigan University (WMU), Ball State University (BSU), University of Kentucky (UK), and the University of Wisconsin Platteville (UWP). Let’s take a look at the schedule (games will be played at the CSU Rec Center).

END_OF_DOCUMENT_TOKEN_TO_BE_REPLACED

The first half of the 2016-17 season is complete. We started the season with 23 active teams in the NCDA and now have 29 with plenty more waiting to get some action in the second half of the season. A total of 119 games were played last semester. That set a new record for the amount of matches played in the first half of the season. One can only predict that this record will continue to be broken for many years to come. This is thanks to the hard work of not just the Executive Board, but the active members of this league who have done an extraordinary job of getting the word out about this great sport. Below is an update on how the newly established member teams are doing this season and how close other prospective teams are to playing in the National Collegiate Dodgeball Association this season.
END_OF_DOCUMENT_TOKEN_TO_BE_REPLACED