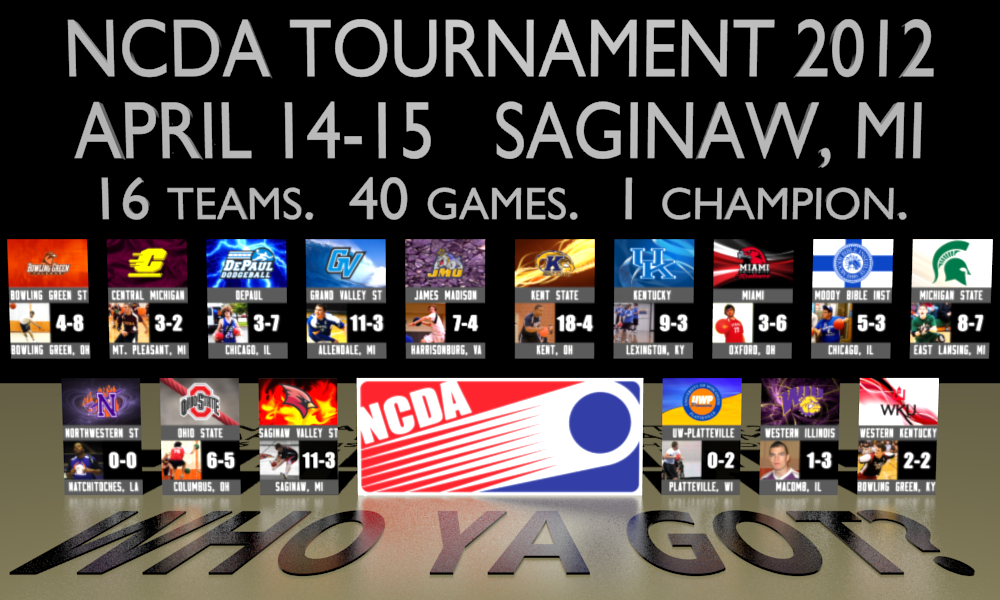 The dodgeball world will all come to Saginaw, MI, on April 14th and 15th, as Nationals 2012 will decide the new NCDA National Champion. There are 16 schools going, including #1 ranked Kent State, last season’s champions Central Michigan, and host school Saginaw Valley. With four pools set up on Saturday, the Sunday single-elimination bracket will be based on 80% of the points accumulated on Saturday and 20% of the points accumulated during the regular season. There will also be an All-Star Game, and an All-Girls game.

Pool A features the dodgeball powerhouse Grand Valley State, along with two dodgeball mainstays in Depaul and Bowling Green and relative newcomer Northwestern State. Northwestern State has not played a match since Nationals 2011, where they went 0-4. Depaul, known as the jesters of the NCDA, is 3-7 this season, beating Eastern Michigan, Western Illinois, and Nebraska. Always in it for the fun of the game, Depaul will enjoy their pool. Bowling Green has had an up and down season, going 4-8. They started off the season 0-5, but finished out 4-3, including wins over Kentucky and Ohio State. They could be a sleeper team to make a run on Sunday. Grand Valley State finished the season ranked #2 in the country, but they have to make up for a disappointing finish at the Michigan Dodgeball Cup, where they lost to both CMU and SVSU. They’re one of the most deadly teams in the league, and anything less than a title will be considered a disappointment.

Pool B includes host school SVSU, Kentucky, Ohio State, and Western Illinois. This may be the the most competitive group, as all four teams were in the quarterfinals of the 2011 National Tournament. Ohio State and SVSU have had some disagreements in the past, so that match is one to watch. The Buckeyes are known as a great catching team, and they could pull off an upset over a higher ranked team. Western Illinois had a down year, but they’re still a good team that can hang with anyone. Kentucky finished the season in the top 4, and feature the hardest thrower in the league. However, the Cardinals should be the favorite for this pool, as their tremendous talent and home court advantage will combine to make them a hard out in the tournament.

Pool C has a mix of classic teams and a new blood- James Madison. The Dukes made a lot of noise their first season going 7-3-1 and finishing in sixth place. Among the classic teams are Wisconsin-Platteville, Miami, and Michigan State. UWP played only two games, but they are usually a solid team at Nationals. Miami played 9 games this season, and two of those were forfeit wins, but they have a good foundation and won two games at Nationals last season. The Spartans are among the dodgeball elite, but they had a lackluster appearance their last time out at the Michigan Dodgeball Cup.

Pool D has this year’s #1 team in Kent State, and last year’s National Champion in Central Michigan, to go along with Moody Bible and Western Kentucky. All four of these schools have the capability to go deep into the tournament, and this could be the toughest pool to predict. Kent State set a record for most games played, but they lost their games to the three Michigan teams they played. Central Michigan played only five games all season, coming out 3-2, but they may have the most talent in the league. Western Kentucky didn’t play an out of state team all season, finishing 2-2, but they’ve shown in the past that they’re a powerhouse. And Moody Bible is always a tough team to play with their talent and smart play.

This year’s Nationals could be the deepest one yet, and every team is capable of making a run in the tournament. Whoever comes out on top will certainly have earned their way to the title, and its looking like it could be a great tournament.