National Tournament Finish: Lost in 1st round to UK

Overview: The season did not end as expected for the University of Maryland Terrapins; probably the biggest understatement of the offseason. Expectations were high going into Nationals, but the Terps went 0-4 during the NCDA’s championship weekend, raising eyebrows among many in the league.

What most don’t know is that UMD was missing about five varsity players from their roster at Western Kentucky. For some teams (GVSU, CMU & JMU) depth isn’t an issue, but it’s a big concern for UMD. Especially when one of the missing players is Curtis Reybold, a player who doesn’t get much love publicly, but is their most efficient and most likely their smartest player on the court.

Maryland is successful because of their team cohesion and strategy, not by taking out a team on sheer talent alone. Rohan Mittal and Mike Cariello highlight the top level of talent on the team, but there’s nobody else that strikes fear into opponents. Maryland is close to being stuck in the same bubble as Kentucky was a few years ago where it was “Wes Hopkins and everybody else.” The main difference is that the Hopkins squad from UK didn’t seem to be as good as at catching as the Terps are. I wish I could say I expect a turnaround at Bowling Green this year but it’s a tough call to make.

Rohan and his teammates have their work cut out for them getting their roster together for BGSU. I have no doubt they will have another stellar regular season, when they usually bring at least 14-15 varsity guys to each tournament. As many know though, when 75% or more of your success comes from the system instead of talent, losing players of any stature can be crippling when it matters most.

For those who don’t know, the University of Maryland is known primarily for being an engineering school along with a few other math and science subjects. Many players on the Terps varsity and JV rosters are at the University for some form of engineering, resulting in incredibly high levels of homework and hours upon hours of necessary studying. This won’t hinder Maryland from making a full 15-20 man roster for Nationals, but it is a 99% guarantee that they won’t have all of their best talent available in April.

The Terps will needs to hit the recruitment trail hard this year, needing to find somebody who will force their name into the national conversation. Rohan is there now, Mike Cariello is getting more recognition as well, but UMD really needs a standout rookie to put them over the edge. Without that and better roster retention come Nationals, expect a solid regular season and the potential for another underwhelming performance at BGSU. 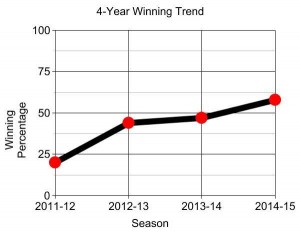