National Tournament Finish: Lost to GVSU in the Final Four

Overview:  Saginaw Valley may have only finished with a 7-10 record last year, but that included a return to the Final Four. Although they came up short against Grand Valley, SVSU proved that they are a force to be reckoned with year in and year out. The Cardinals will no doubt have another championship on their minds this season.

A big question leading up to last year’s Nationals was how well is Saginaw Valley going to compete? They had just come off an 0-4 performance at a tournament with what many regarded as the top five teams in the league. Well, they answered those critics with a trip to the Final Four. They were able to beat MSU 2-1 in a game in which they dominated the first half and then held off a rally from the Spartans in the second. They then faced their biggest rivals in Grand Valley in the Final Four. It took a great performance by the Lakers to avoid losing the first point and going into the half down 1-0. Had SVSU been able to close out that first point, there very well could have been a different National Champion last season. Although the Cardinals lose some of their top players from last season, they return much of a team that competed very well at Nationals despite limited action during the regular season.

Saginaw loses a lot of experience with Max Siler, Nate Krause, Blake Grivetti, and Gregory Gaskin all having moved on. These all were not only great players that SVSU relied on to make big plays each point, but also leaders of the team on and off the court. SVSU’s overtime roster will certainly look different this season without these four players.

That being said, the captains for the 2015-16 season all possess great skill and experience. Cody Putnam is their captain and probably best arm. Best known for his fiery demeanor on the court, it will be interesting to see if tones down his energy or instead if the team feeds of it and becomes more like their captain on the court. Joining him as captain is Joe McCumber, a player who has quietly grown into one of the underrated players in the league, in my opinion. A lefty, Joe has a very accurate throw that often catches people off guard. I think this could be a breakout year for Joe and he could become a well known player and perhaps All-American by year end. Assistant captain Andy Miller, much like his captain Cody, also has a very good throw and a enthusiastic attitude on the court. The other assistant captain David Cook always seems to be alive at the end of the points. He will need to continue to do this to provide the leadership for SVSU in late-point situations.

Another returning player who will be a difference maker for the Cardinals is Kyle Foster. Kyle is easily one of the best catchers in the league. He is one of those guys that I tell my team to not throw at until he is one of the last people on the court and we can throw three or four balls at him. Even then, I’ve seen him come away unscathed and with a catch in his arms. SVSU will rely on Kyle to catch well and catch often. Another difference maker could be Bernabe Salinas. Bernabe quickly grasped ahold of the game of dodgeball last year. By the season’s end, he was one of the players SVSU counted on to make big plays, even as a rookie. He has quite a god throw for a rookie and I’m sure it will only improve in his second year. Another note about Bernabe, his brother is on the MSU team and it is always entertaining to see the two of them go at it on the court and celebrate when they get the other out.

SVSU is known for sticking to their tactics within games. They play their strategy and then ramp up the pace when they get a few catches and a few kills. In a matter of seconds the game can completely swing in Saginaw’s favor and they can have the point nearly won. I can only imagine this will be even more the case this season with their new leadership in charge. With the passion Cody and Andy have on the court, I wouldn’t be surprised if SVSU is able to go from tied 12-12 in men to 12-2 in a minute. Just like any other team in Michigan, Saginaw Valley will have its eyes on a championship this year. Don’t let last year’s 7-10 mark mislead you, SVSU will once again be a top team in the NCDA this season. 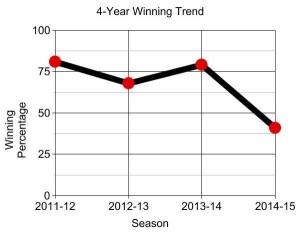