The Grand Valley State Lakers went 16-2 last year en route to their National Championship. The NCDA hasn’t had a repeat champion since 2009-2010 GVSU. This year Grand Valley State looks to repeat again while they overcome a change of leadership, and strong NCDA competition.

The Lakers will try to stay on top with a change of leadership at the top. Junior Kevin Bailey (#4-C) will take over for Senior Mark Trippiedi (#8). Bailey will be assisted by veteran Dylan Fettig (#24-A) and Junior Pat Delling (#20-A), who is returning to the court this season after missing almost all year with a torn ACL. 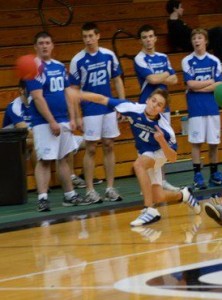 The roster is loaded with upperclassmen. Half of the perspective roster will be seniors, all of them will have championship experience. Also the core leadership from last seasons team is all still active. Trippiedi and Kenny Bacchus (#32) return as two of the teams most recognizable players, bringing seven combined seasons of experience.

The Lakers will look to replace the production of 3 players. The toughest one to replace will be 3 time all star Jeremy Stempky (#15), Also gone are Matt Zinn (#10) and Patrick Graves (#25). Improvement from the underclassman as well as a strong recruiting class will help GV deal with the losses.

GVSU will look to increase its total games played this season. They are working on hosting their own tournament in the first semester. They are also going to be playing the annual Battle of the Valleys hosted in Allendale this year, as well as possibly the MSU invite. And in the second semester some single games scattered amongst the Chicago Dodgeball Open, Michigan Dodgeball Cup, and of course NCDA Nationals.

GVSU knows they will get everyone’s best shot as they work their way to try to earn the programs 6th National Title.